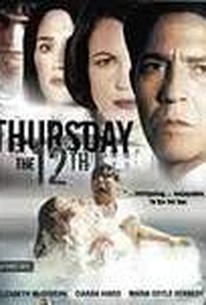 Originally telecast over Britain's ITV1 in 2000, the two-part mystery miniseries Thursday the 12th began with the discovery of an unidentified body on the estate of Marius Bannister (Ciaran Hinds), a wealthy dentist and politician. As an investigative TV reporter Julian Glover sifted through the particulars of the case, the viewer was introduced to the dramatis personae: Bannister; his wife, Nina (Maria Doyle Kennedy); their troubled adopted teenaged son, Martin (Jim Sturgess); and Nina's predatory sister, Candice Hopper (Elizabeth McGovern). In Rashomon fashion, a series of flashbacks indicated that any one of these worthies had motive aplenty to be a murderer -- and in fact, one of them was the victim. The key to the mystery was in the hands of Marius' supposedly senile father, Edgar Bannister (Peter Vaughan). In the U.S., Thursday the 12th first aired over the Bravo cable network on June 4, 2003. ~ Hal Erickson, Rovi

Critic Reviews for Thursday the 12th

There are no critic reviews yet for Thursday the 12th. Keep checking Rotten Tomatoes for updates!

There are no featured reviews for Thursday the 12th at this time.