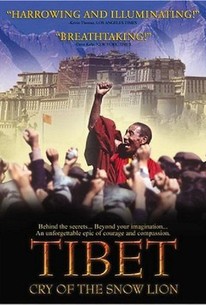 Critics Consensus: Makes no effort to do more than present one side of its story, but does it so passionately and persuasively that the viewer almost cannot help but be moved.

Critics Consensus: Makes no effort to do more than present one side of its story, but does it so passionately and persuasively that the viewer almost cannot help but be moved.

Critic Consensus: Makes no effort to do more than present one side of its story, but does it so passionately and persuasively that the viewer almost cannot help but be moved.

Shortly after graduating from the University of California at Santa Barbara, filmmaker Tom Peosay and his wife Sue (an Asian Studies major) set out on a tour of Asia that culminated in an extended stay in the Chinese-occupied nation of Tibet. With that formative visit, the Peosays became actively interested in the small Himalayan nation's tempestuous history and, over the course of the next decade, made a number of return visits to document Tibet's story, as well as interview a number of its residents and higher-profile participants of the "Free Tibet" movement. Their completed documentary, entitled Tibet: Cry of the Snow Lion, encompasses a brief history of China's invasion and subsequent five decades of rule, as well as the various uprisings that have occurred over the years -- with particular emphasis on the 1987 riots. A number of high profile Hollywood actors lent their voices to this project, including Martin Sheen (who narrated the film), Tim Robbins, Susan Sarandon, and Ed Harris.

The Dalai Lama
View All

Critic Reviews for Tibet: Cry of the Snow Lion

It is pretty convincing in its argument that China has every intention of destroying the culture of Tibetans.

Makes a valuable contribution to our understanding of a people that the world must never be allowed to forget, no matter how much their oppressors would prefer us to do just that.

A passionate work of advocacy documentary.

A sobering examination of a land in turmoil and a people that have faced what former U.S. ambassador to the United Nations Jeanne Kirkpatrick cites as 20 years of ethnic cleansing.

A colorful but grimly efficient documentary about a culture under siege.

preaches to the converted, but it preaches well and may serve to inspire more people to take action on behalf of Tibet

This incredible documentary, so excellently crafted, is both moving and informative.

A compelling story that it should not be missed. The photography of Tibet is as gorgeous as the footage and stories of Chinese atrocities are disturbing.

As objective as any film on the subject can possibly be, Tibet was reportedly made over the course of a decade, sustained by a passion and dedication on the part of its makers that resonates in every frame of this gripping, heartbreaking odyssey.

If you've attended a Beastie Boys concert and picked up some free literature, chances are a substantial amount of this information is already known to you.

Audience Reviews for Tibet: Cry of the Snow Lion

There are no featured audience reviews yet. Click the link below to see what others say about Tibet: Cry of the Snow Lion!