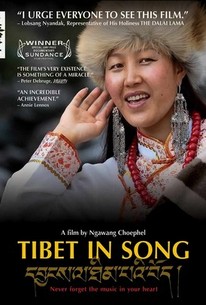 In the West, surrounded by iPods, instant downloads and an ever-changing onslaught of new music and performers, a simple song is something easily taken for granted. In the East, in Tibet, folk songs serve as the connective tissue between regions, passed down in the oral tradition through an increasingly fragmented country and region, much of which remains under harsh Communist Chinese rule after 50 years of occupation. Tibet was a sovereign nation for thousands of years, with its own music, heritage, laws and customs. Its folk songs convey and preserve ethnic, religious and philosophical customs that date to primeval times. But China's "patriotic reeducation" of Tibetan citizens through its dissemination of nationalistic pop songs is designed to wipe out Tibetan culture. TIBET IN SONG examines what happens when one man, Ngawang Choephel, a Tibetan native who fled his country of origin for India at the age of two, joining thousands (including the Dali Lama) seeking refuge from the Chinese occupation. In 1995, Choephel returned to Tibet to make a documentary film on Tibetan music rescuing his culture from extinction. It was then that TIBET IN SONG began. But soon after Choephel was arrested on charges of espionage by Chinese authorities. He was sentenced to 18 years in prison, serving nearly seven years before his highly publicized release in 2002 with the help of then- Vice President Al Gore, Paul McCartney, and Annie Lennox, among many others. Undeterred by his seven years of imprisonment, Choephel was ever determined to finish his film and production resumed immediately after his release. For the first time since his release from prison Ngawang Choephel can tell his story. With stunning cinematography of Tibet and rare access to voices of the region, TIBET IN SONG is the story of one man and one nation struggling to save the culture of their people. The film weaves a mesmerizing story of beauty, pain, brutality and resilience, introducing Tibet to the world in a way never before seen on film. -- (C) Guge

Critic Reviews for Tibet in Song

Could pressure by outside activists cause the Chinese to temper its campaign against traditional culture? "Tibet in Song" suggests that it's worth trying.

A potent story wrapped in a weak documentary.

Doubly powerful because he also weaves in the overall history of Tibet's struggle, a primer on the Chinese government's campaign to muzzle Tibetan culture and vignettes from other Tibetans who resisted.

[An] intriguing, and at times too dispassionate, chronicle of injustice.

During its most inspired moments, Tibet in Song becomes an artist's last stand against foreign rhetoric, propaganda, and fear, an aged songbook charting the still thriving heart of Tibet's artistic soul.

A heartrending documentary about the eradication of Tibetan culture.

My guess is it will mostly appeal to folks who are already into the culture of Tibet. And I bet they'll love it.

Overall, Tibet in Song provides an impassioned, yet relatively clear-eyed account of its director's turbulent homecoming.

Audience Reviews for Tibet in Song

There are no featured audience reviews yet. Click the link below to see what others say about Tibet in Song!