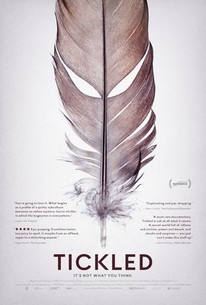 Critics Consensus: Tickled uses an investigation into a silly-seeming subculture as the launching point for thought-provoking insights into online bullying and the destructive abilities of the internet.

Critics Consensus: Tickled uses an investigation into a silly-seeming subculture as the launching point for thought-provoking insights into online bullying and the destructive abilities of the internet.

Critic Consensus: Tickled uses an investigation into a silly-seeming subculture as the launching point for thought-provoking insights into online bullying and the destructive abilities of the internet.

After stumbling upon a bizarre "competitive endurance tickling" video online, wherein young men are paid to be tied up and tickled, reporter David Farrier reaches out to request a story from the company. But the reply he receives is shocking-the sender mocks Farrier's sexual orientation and threatens extreme legal action should he dig any deeper. So, like any good journalist confronted by a bully, he does just the opposite: he travels to the hidden tickling facilities in Los Angeles and uncovers a vast empire, known for harassing and harming the lives of those who protest their involvement in these films. The more he investigates, the stranger it gets, discovering secret identities and criminal activity. Discovering the truth becomes Farrier's obsession, despite increasingly sinister threats and warnings. With humor and determination, Farrier and co-director Dylan Reeve summon up every resource available to get to the bottom of this tickling worm hole.

The shocking truth is uncomfortably pursued to its fullest, and the result is a riveting piece of investigative journalism.

It's not a film you'll soon forget.

Tickled is an unexpectedly engrossing documentary that's built around the hitherto unexplored (on film anyway) world of "competitive endurance tickling".

It would be unfair to spoil the surprises in David Farrier and Dylan Reeve's investigative documentary Tickled, but the premise should be enough to draw you in.

More meaningfully, Tickled offers an anatomy of intimidation that feels particularly relevant for our post-Gamergate times.

'Tickled' is not an aesthetically adventurous project, but Farrier and Dylan manage to situate their cameras in inventive places and capture moments that others may have overlooked.

A hilarious and horrifying true story about the world of competitive tickling, to watch with your mouth agape.

Suffice it to say, Tickled is only ostensibly about "competitive endurance tickling," which may or may not actually exist depending on who you ask...

Farrier, with the help of his co-director Dylan Reeve, take us on a trip that goes beyond the world of 'competitive tickling'. This topsy turvy journey will surprise you, confuse you, anger your, and leave you wanting to hear more...

The insane levels of aggression levelled at anyone who walks away tips this fascinating story from one of awkwardly uncomfortable comedy to something much more unsettling, a disturbing thriller of unimaginable psychological abuse and cyber-bullying.

When two journalists dig into a fringe subculture, they discover a darker, twisted reality. The result plays like a paranoid conspiracy thriller as they face lawsuits, harassment and threats, homophobia and bullying.

Some of the greatest stories are so bizarre and unpredictable that they could only come from real life, and documentaries are a terrific showcase for the strange-but-true realities of our world that have escaped notice. Tickled begins as an innocuous look into amateur competitive tickle videos online, an obvious minor fetish industry that swears by its integrity as legitimate sport. A curious New Zealand journalist is then beset by homophobic harassment, personal attacks, and legal threats, which only makes him more determined to unravel the source of these tickle videos. It reminds me of 2010's Catfish except this story actually has the stakes that film ultimately lacked. It's an investigative piece of journalism that involves working through false identities, spooked video participants that have had their lives ruined from persecution, interviewing lackeys on hidden video, and ultimately discovering the true source behind the web of lies, a man that uses his privileged class position and wealth to intimidate and exploit others. It's a movie that starts off goofy and just becomes darker, more serious, and downright sad by the end, leaving you with the sinister impression of the danger of a powerful bully using Internet anonymity to satisfy his repressed kinks including emotional sadism. Tickled could be better as it feels disorganized and padded out, including an extended trip to another tickle fetish vendor. The ending leaves something to be desired as well and will send you online to scour for more information. Still, the story is naturally intriguing and the filmmakers don't mess up a good thing by allowing the curiosity to grab an audience. Nate's Grade: B

FUNNY BUSINESS - My Review of TICKLED (3 Stars) Sometimes jaw-dropping doesn't mean great. It may just mean that there are moments of surprise amidst a sea of questionable storytelling. Such is the case with TICKLED, the documentary by New Zealand filmmakers, David Farrier and Dylan Reeve, in which that moment of realization, the anagnorisis, feels stunning until you look back at how it was achieved....and then you may just feel slightly dirty. Let's rewind for a sec. Farrier and Reeve, an entertainment journalist and editor respectively, teamed up when they both stumbled upon Competitive Endurance Tickling videos online. After blogging about it online, their first inquiries resulted in threatening, homophobic (Farrier is gay) responses from a woman claiming to represent the producing company. Being good reporters, this only made the men more curious to delve deeper. What they uncovered proved far more nefarious than what they initially expected. In the tradition of host-driven documentaries like those of Michael Moore and Nick Broomfield, Farrier and Reeve insert themselves into and basically become part of the story. I won't spoil their discoveries, but the film seems on track to explore the perils of online coercion, identity theft and blackmail. Unfortunately, I took issue with the filmmakers' ambush tactics to get their story. Much as Michael Moore ambushed Dick Clark and Charlton Heston to get interviews with them, Farrier and Reeve use hidden cameras, secret voice recordings, or just showing up with cameras rolling to surprise their disapproving targets. We also witness some 11th hour sleight of hand as they miraculously uncover key evidence and subsequently get some PSYCHO-era dime-store psychology on one of the alleged perpetrators. It's all very haunting and, if true, speaks volumes on such issues as self-hatred, revenge, bullying, and how seemingly innocuous internet postings could ruin lives. The participants in these fetish videos are all young, Abercrombie & Fitch type models. They're mostly clothed, and despite the obvious homoeroticism, nothing overtly sexual occurs. How much the models knew about the videos actual usage remains somewhat of a mystery since only one model comes forward for an interview. In fact, some of the parties involved have attempted to discredit and/or seek legal action against the filmmakers, denying the allegations, claiming the subjects signed releases and had full knowledge of the company's intentions, and calling foul on the filmmakers' less-than-ethical tactics. The veracity of this documentary remains to be proven with both sides standing firm on their convictions. Regardless, TICKLED suffers from storytelling and filmmaking issues. A detour to another Tickling Video producer feels like filler as it doesn't seem to have any bearing on the main subject. Sure, it provides exposition we wouldn't have been able to get except in a voiceover, and the tickling demonstration we witness goes a long way in showing the fun side to this activity, but it feels like it's padding a slightly thin story. Also, the filmmakers in one moment use SURVIVOR-style symbolism of a bird of prey snatching away a squirrel, which elicited an audible groan from this viewer. I also felt empathy for the subjects when they were filmed without their permission, regardless of what crimes they may or may not be committing. On the plus side, Farrier and Reeve don't play to the cameras in the way Moore and Broomfield do. They're rather benign and quite kind to their subjects, never appearing to showboat to make a point. Because of that, I liked them but didn't necessarily like their methodology. It's kind of like tickling itself, it's hugely enjoyable/torturous in the moment, but when it's over, you don't feel anything anymore. You're left haunted, slightly traumatized, and yet unwilling to experience it again.