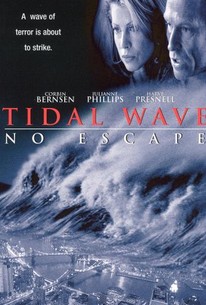 A madman learns how to control the oceans for his own purposes, and two very different scientists band together to stop him in this made for TV disaster movie. The coastline of Southern California is suddenly besieged with a series of tidal waves which threaten to wipe out a number of seashore communities. Investigators suspect that the tsunamis are not of natural origin, and oceanographer Jessica Weaver (Julianne Phillips) and weapons expert John Wahl (Corbin Bernsen) are brought together to look into the matter. Together, they uncover evidence that the waves are the work of a terrorist, but when a billion dollar ransom is demanded to save Los Angeles from a massive tidal wave, some suspect that Wahl is in cahoots with the bad guys. Tidal Wave: No Escape also features Harve Presnell, Lawrence Hilton-Jacobs, and Gregg Henry.

Hugh B. Holub
as Financial Analyst

There are no critic reviews yet for Tidal Wave: No Escape. Keep checking Rotten Tomatoes for updates!

There are no featured audience reviews yet. Click the link below to see what others say about Tidal Wave: No Escape!