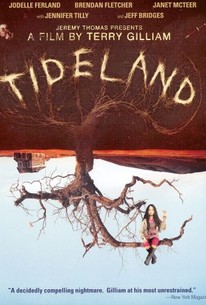 Critics Consensus: Tideland is a disturbing, and mostly unwatchable effort from Terry Gilliam.

Critics Consensus: Tideland is a disturbing, and mostly unwatchable effort from Terry Gilliam.

Critic Consensus: Tideland is a disturbing, and mostly unwatchable effort from Terry Gilliam.

A young girl named Jeliza-Rose is transported to her grandparents' farm following her mother's drug overdose. Once there, she embarks on a fantastic voyage into a world of bog men and disembodied Barbie heads.

This two-disc set is sure to keep Gilliam's few Tideland fans buzzing for some time.

Honest, unflinching and worthy of reappraisal.

Pointless and an excruciating bore.

The movie itself feels like an overstuffed burrito: Nicola Pecorini's cinematography has verve but no visual sense, and the film's self-important pace turns deadening over the long haul.

Gilliam's plan to make a small budget film of limited scope that would leave him free to display his unfettered creative genius sounds good on paper. However, his melodramatic, Alice In Wonderland variety fairy tale is sadly near-incomprehensible.

It works best when Gilliam allows Jeliza-Rose to disappear inside her own mind, revelling in unrestricted solitude.

It is true that Gilliam makes his movies through fire and brimstone just by examining his extraordinary filmography, and there is no denying that Tideland is a film that was borne out of that.

...in the midst of all the perverse chaos, a story emerges that is easily the most tender and even sentimental in all of Gilliam's work.

It seems, from the flat-out filmic disaster of "Tideland," that director Terry Gilliam is intent on ensuring a decisive end to his checkered filmmaking career.

Now, I like pushing boundaries as much as the next guy. When it's done well, as in say Todd Solondz' wonderfully dark Happiness, it can be searingly challenging. But in the case of Tideland it's just uncomfortable to watch.

Such an odd and when deeply looked into, a very demented children's story. I don't think there's every going to be a movie again that uses a corpse like it was in this. Terry Gilliam's love for Alice in Wonderland type scenarios really comes through in this, probably the easiest to pick up on. It also reminded me of something by Steinbeck or Twain, mainly the setting and characters. Overall, if you're a fan of Terry Gilliam you'll probably love it. If not, you'll probably just watch it in awe of such madness.

Terry Gilliam hasn't exactly dazzled us with either the quantity or the quality of his work in recent years though this is still easily the best thing he has done since Twelve Monkeys, certainly much better than its 27% critics' rating would suggest. The story centres on Jeliza-Rose (Jodelle Ferland, remarkably assured), a damaged little girl who escapes into her imagination to pass the time that her junkie parents (Jeff Bridges and Jennifer Tilley) spend 'on vacation', the euphemism by which they refer to their interminable, drug-induced stupors. After Jeliza-Rose's mother fatally overdoses, she and her father flee to rural Texas and that staple refuge of the fairy tale, Grandmother's house... I must admit, I wasn't sure what to make of this for the first half hour; it wasn't until Bridges embarked on his final vacation, leaving Jeliza-Rose and her doll's-head friends to explore the house, that the movie really started working for me. Though the overall tone is dark and unsettling, there are some leavening moments of black comedy along the way, and the lonely girl's attempts to befriend her eccentric neighbours are sweet and touching. Monty Python fans will enjoy an animation set inside Jeff Bridges chest cavity (don't ask!) that recalls Gilliam's early work on the Flying Circus.