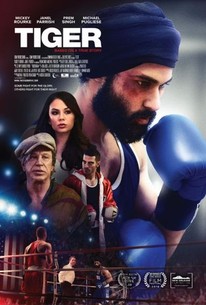 Tiger is inspired by the true story of Pardeep Nagra, a practicing Sikh man who was banned from the sport of boxing due to his religious beliefs. Tiger follows Pardeep's journey as he, with the support of his coach and mentor (Mickey Rourke), does what any strong American would do, fight back! The backlash is a result of racial profiling, stereotypical threats, and the daily pressure to change, even from his loved ones who are caught in the midst of the cross fire. Consequently, his legacy will be forever tied to his two biggest battles; one in the courtroom, the other in the ring.

Any sports film, no matter its scale or handicap, has to land its narrative and aesthetic punches - and Tiger clings to the ropes more often than not.

Utterly disappointing, I cannot recommend this film to anyone.

Tiger's insistence on checking off boxes becomes distracting. This makes for a boxing film that has much to say, but lacks the overall punch in its delivery.

It's inspiring what encourages staying the course and working to uphold one's beliefs.

It's more concerned with [formula], in order to provide a simple and feel-good story, than with the specifics of its subject, his challenges, and his faith.

As ambitious as it is, Tiger is nevertheless a tame take on an actual Canadian sports triumph.

Tiger could've blended a traditional, feel-good sports movie narrative with a healthy dose of social and religious commentary. Instead, it's all rather silly and goofy rather than inspiring.

There's no boxing-movie cliché left unturned in this biopic... but it's an amiably rousing effort all the same.

There are enough facts and inspiration to make Tiger worth watching. Mickey Rourke always gives a good performance, and he still fits in the boxing setting.

There are no featured audience reviews yet. Click the link below to see what others say about Tiger!