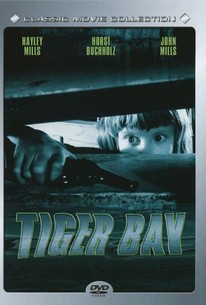 Twelve-year-old Hayley Mills made her film starring debut in the location-filmed melodrama Tiger Bay. Horst Buchholz plays a Polish sailor who, while docked in Cardiff, jealously murders his ex-girlfriend Yvonne Mitchell. The killing is witnessed by Hayley, a lonely, hoydenish preteen whose only interest in the crime is Buccholz' abandoned gun. Hayley picks up the weapon, intending to impress the other kids in town. She succeeds only in attracting the attention of police inspector John Mills (Hayley's real life father), who wants to know where she found the gun and under what circumstances. An experienced liar, Hayley drives the inspector crazy with her fabrications. Sent home with a stern reprimand, Hayley is kidnapped by Buccholz, who doesn't want to kill the child, but doesn't want to be revealed to the police, either. Convinced that Buchholz means her no harm, Hayley offers to help him escape. He returns the favor by rescuing her from a watery grave, at the cost of his own freedom. On the basis of her performance in Tiger Bay, Hayley Mills not only won a special prize at the Berlin Film Festival, but was invited to star in Disney's Pollyanna (1960).

The twelve-year-old Hayley Mills, the daughter of the great Brit actor John Mills, also starring in the film, makes her acting film debut an outstanding one.

This may not sound promising but the film wins sympathy from the start - and it offers a memorable debut by actor John Mills' twelve year-old daughter Hayley.

The effort to bring out the tough variety of place and class and feature is something that wants applauding even when it only half succeeds.

Lee-Thompson's direction, less happy in the early scenes of murder and first encounter, is otherwise craftsmanlike, with a good use of locations and above all a firm feeling for outcasts and foreigners, their solidity and their background.

Above average Disney drama with Hayley Mills and dad John.

Hayley Mills stars in this film along with Actor Father John Mills in a story of Murder, loyalty and unconventional friendship

The best Hayley Mills film, no comparison. She always was better at playing tomboys. Horst Buchholz (Magnificent Seven) is tragic, charming and utterly gorgeous all at the same time. For those who fell for the Hollywood bad boy rebels such as James Dean, Marlon Brando and Steve McQueen should watch this film. I love how John Mills (Hayley's dad) seems to be in awe of his daughter in some scenes. This is an utterly utterly utterly brilliant film.