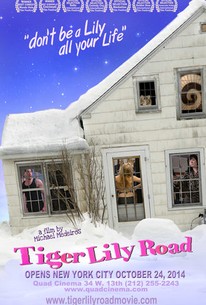 In this sexy and subversive dark comedy, best friends and housemates Annie and Louise, pushing 40, are about to step through the looking glass. ANNIE a small town vet is also a compulsive empathizer, and according to Louise and that's why the casualty rate on her relationships has been so high. But LOUISE, the "class slut," hasn't done any better. After a demeaning encounter with Annie's old boyfriend, RUSSELL, "probably the last straight, relatively sane, single man in our town" quips Louise, both friends drink tequila and swear a blood oath to give up men for a year. Later that night, as heavy snow begins to fall, a handsome smart ass named RICKY, on the run from the law (he stole a hot dog from a convenience store) breaks into their house trying to escape the storm. When the phones and power go out, Annie and Louise are forced to deal with their attractive and seductive hostage. Louise refuses to back down from the sexual power struggle she's helped to instigate as she becomes more and more alarmed at the growing bond forming between Annie and Ricky. In this modern day fairytale, friendships and freedom are tested as the situation spins wickedly out of control. (C) Official Site

Stephanie Tinfo
as The Barracuda
View All

While not as kinky, dark, or schizoid as debuting director/screenwriter Michael Medeiros intends, Tiger Lily Road succeeds on its own small, claustrophobic level.

A mostly diverting black comedy which has a strong vein of teasing, titillating waggishness until it goes completely south in its final moments.

There are no featured reviews for Tiger Lily Road at this time.