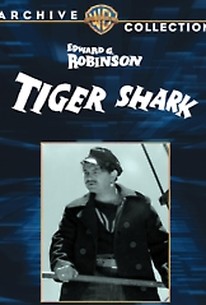 Have you heard? Mike Mascarenhas (Edward G. Robinson), the blustery, socially awkward San Diego trawler captain with a hook for a left hand, is getting married. One problem: Mike's bride (Zita Johann) has eyes for Mike's crewman and friend (Richard Arlen). Tiger Shark's storyline of red-blooded workingmen in love with the same woman would surface again in Warner's Slim and Manpower. And before those three titles there was They Knew What They Wanted, the Pulitzer Prize-winning Sidney Howard play that reportedly provided a seed of inspiration for director Howard Hawks. Yet even more powerful than the durable tale of a love triangle are Tiger Shark's scenes of commercial fishing: the strikes, the reeling in, the dangersthe circling of voracious sharks.

There are no critic reviews yet for Tiger Shark. Keep checking Rotten Tomatoes for updates!

There are no featured reviews for Tiger Shark at this time.