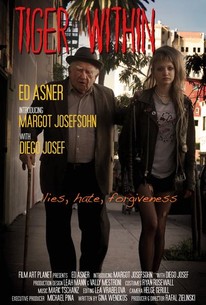 A young punk who thinks she knows it all. An old man who knows he doesn't. They strike up a conversation, it becomes life-changing. A deepening knowledge occurs as they walk the streets of LA. He is a Holocaust survivor; she a sex worker on the run and a Holocaust denier, though he doesn't hold any of that against her. Newcomer 14-year-old Margot Josefsohn plays angry but stunningly naïve Casey, living from hand to mouth on the streets of LA fending off the frightening advances of men, having nowhere to go. She trusts no one. Samuel, played by the sublime, multiple Emmy Award-winning actor Ed Asner, trusts everyone. She tells him she hates Jews, he asks her if she needs a place to stay. The two form an unexpected friendship, which gradually blossoms into a new family unit -- him providing her the support and guidance that was lacking in her life, and her offering him the glimpse of the fatherhood that was torn from him many years prior.

Ryan Rosewall
as Girl at Show

Critic Reviews for Tiger Within

It's definitely an up and down experience qualitatively, but [Margot] Josefsohn shows some talent as a young actress and Asner is really quite good.

Under the control of Gina Wendkos' tenderhearted screenplay and Rafal Zielinski's mellow direction, the messages of forgiveness, fortitude, and healing are splendidly universal.

Whatever its scattered virtues, "Tiger Within" never shakes that "didn't think this through" vibe, poor choice of titles included.

There are no featured reviews for Tiger Within at this time.