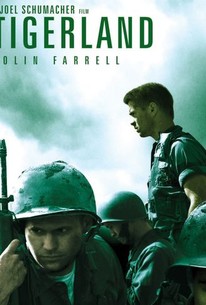 Critics Consensus: A great cast and the gritty feel of the film help elevate Tigerland above the familiarity of the subject matter.

Critics Consensus: A great cast and the gritty feel of the film help elevate Tigerland above the familiarity of the subject matter.

Critic Consensus: A great cast and the gritty feel of the film help elevate Tigerland above the familiarity of the subject matter.

A young man tries to fight the military system only to find it fighting back in unexpected ways in this hard-edged drama. In 1971, Roland Bozz (Colin Farrell) is a draftee who has been sent to the Advanced Infantry Training Facility in Fort Polk, LA, where with hundreds of other new soldiers he's to be taught a final course in combat skills before being shipped out to Vietnam. Bozz has no interest in going to war, and is determined to get sent home as a troublemaker. But his plan backfires; his superiors regard his insubordination as a sign of intelligence and independent thinking, and he's told he might some day become an officer. Bozz and his fellow soldiers -- aspiring writer Paxton (Matthew Davis), sensitive Miter (Clifton Collins Jr.), philosophical Cantwell (Thomas Guiry), bloodthirsty Wilson (Shea Whigham), and heroic Johnson (Russell Richardson) -- are taught how to survive as they face their fears of death and wonder if they can somehow escape going to war. Tigerland was directed by Joel Schumacher; in a change of pace from his best-known work (Falling Down, Batman Forever, and Batman and Robin), the film was made on a relatively low budget (under $10 million), was written by first-time screenwriters Ross Klavan and Michael McGruther, and features a cast of young, little-known actors. ~ Mark Deming, Rovi

Christy McKee
as Hooker No. 1

Nubia
as Girl with Bandana

Karolyn Arnold
as Hooker No. 2

Dennis Benatar
as Gate to Tigerland Sergeant
View All

This take on Vietnam War doesn't break new thematic ground but it's Schumacher's best film since the 1993 Falling Down, and it showcases the talents of newcomer Colin Farrell, who has everything that it takes to become a major Hollywood star

Stylistically this is more interesting and more affected than Schumacher's Flawless. Either way, it's a big improvement on his past tendentious nonsense.

Even when the script overtaxes the allegory about how Vietnam divided a nation at home, Schumacher and the actors prevail by fixing their sights on what happens to men on that last stop before the game of war becomes a grim reality.

A beautifully crafted, brilliantly acted and gently moving film that only occasionally lapses into sentimentality.

Despite his usual ability to spend more time on set design than he does on actors, Schumacher handles the more intimate setting with great skill.

For those who don't mind being challenged, however, and are curious to see why Farrell is being touted as the next big thing, Tigerland has its rewards.

It's nothing like the first half of Full Metal Jacket, but an intriguing companion watch.

I wouldn't put Tigerland in the top ranks of war movies, but it's a solid second-tier entry that makes you think about the characters.

Farrell is the best thing about the film, which veers into oversentimentality quite a bit for a film that's shot with such a gritty aesthetic.

Ever since Three Kings redefined just how great a war movie can be, movies like Tigerland have become unforgivable.

A talented newcomer with genuine presence, Farrell is able to suggest some complexity in a character that is written without any.

...never quite catches fire or becomes the searing expose that director Schumacher intended.

Basically this is just a low-budget indie mashup of Cool Hand Luke and Full Metal Jacket, and you know what? This might be a tired formula, but it still kinda works. Maybe it helps that this was shot docudrama style, and the cast was filled with (then) unknowns. Colin Farrell had his breakout role here, and, while he isn't quite able to completely hold the film up on his own shoulders, he's pretty good and definitely shows promising as a talented lead...even though his brogue does occasionally slip through his noble attempt at a Texan accent. The plot is that of the typical rebel without a cause named Roland Bozz out to challenge authority. The setting is a training camp in Louisiana in 1971, and this particular camp has a reputaton for being brutal, as well as the last stop for many before being shipped to Vietnam. Bozz is very capable at being a good soldier, yet he'd rather spend most of his time farting around and doing his own thing, regardless of the consequences. There's some other great performances from Clifton Collins Jr and Matthew Davis. Even Michael Shannon makes an appearance. The characters are little more than cutouts, and the actors playing drill sargeants are doing half assed and less effective R. Lee Ermey impressions, but like I said, this all kinda works. Maybe it just has to do with Schumacher getting back to basics and working with a low budget and going for a less mainstream character study. Yeah. I think it's that last one. Go check it out.

The system wanted them to become soldiers. One soldier just wanted to be human.

An extreamly powerful drama. It's remarkable, thoughtful, conflicting and exhilerating. Director, Joel Schumacher's masterpiece, his finest film yet. A groundbreaking, original, riveting and magnificent tour-de-force of a movie. Colin Farrell is extroadinary, giving an explosive breakthrough performance that shows what maximum potential really is.

Capt. Saunders: You are pissing your life away. Bozz: Well, I don't need the fucking army and I don't need the fucking war to tell me that, Sir! I really enjoyed this movie. It was well made and well acted, keeping me interested throughout. Colin Farrell's first lead role is easily one of his best. If I didn't know (and really enjoy) the fact that he is hardcore Irish, I'd be shocked to learn that he's not actually a Texan, or at least American. This is also good proof that even if director Joel Schumacher has made some really (really) bad movies (Batman & Robin, The Number 23) he still does make a few quality flicks now and again. Staff Sgt. Thomas: Any questions? Bozz: I got a question, Sergeant. If I'm dead, how come I can ask you a question? Set in 1971, Colin Farrell stars as Bozz, a troublemaking soldier in boot camp, making his way into the final weeks before going to the final live-ammo training ground known as Tigerland. Bozz is defiant to the standard rules that the drill sergeants want to impose on him, but he is also a very smart individual, knowing well enough about how to just get by, as well as sometimes help those in need (he also manages to make a few enemies in his squad as well). Soon enough, Bozz is actually given the chance to lead, much to the dismay of some others, but his general manner doesn't change whatsoever, instead, Bozz continues his ways which may or may not get him or others hurt in the process. During all this, Bozz and the one he is closest to a friend with, Paxton (Matthew Davis), have various discussions about the life of a soldier. Bozz: If I told you there was a bunch of people around here who could get us to Mexico, away from the war, would you go? Paxton: No... no I wouldn't. I enlisted, so there is a place for me... and if I don't go, somebody is gonna take that place. And if they die, they're dying for me. The movie succeeds by taking a very simplistic approach. The movie is shot on 16 mm, giving it an extremely grainy quality, providing for a picture that somehow looks good and bad at the same time. All of the actors give the presence of men seeming very natural in their setting. The use of the boot camp set is certainly effective in pulling in the audience. I was very much absorbed into this movie. I found myself entertained throughout, interested in what happened to these characters, and curious about the various elements taking shape in throughout this story. Bozz: What else they gonna do? Send us to Viet-Fucking-Nam? Too late for that shit.