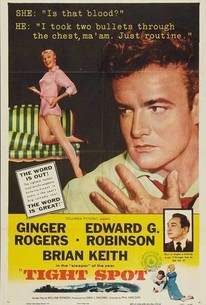 Tight Spot is based on Leonard Kantor's novel Dead Pigeon, which in turn was obviously inspired by Virginia Hill's appearance before the Kefauver Committee. Ginger Rogers plays hard-boiled model Sherry Conley, who is serving a prison term for a crime she didn't commit. Sherry is offered her freedom -- and immunity -- by U.S. attorney Lloyd Hallett (Edward G. Robinson) if she'll agree to appear as a material witness in the trial of mobster Benjamin Costain (Lorne Greene). Unfortunately, Costain has a long reach, and is able to coerce Vince Striker (Brian Keith), the detective assigned to guard Sherry, to allow Costain's hired guns to invade the hotel room where Sherry is being hidden. The star witness is surly and uncooperative, but she finally decides to testify when her escort, policewoman Willoughby (Katherine Anderson), is murdered by Costain's goons. But Striker is still around and about, still determined to do Costain's bidding.

Will J. White
as Plainclothesman

Dean Cromer
as Policeman
View All

The cinematic equivalent of a bottle episode of television-a bottle noir, if you will-Tight Spot is a delicious drink of something strong, sharp, yet soothing.

A good suspense yarn, with one or two surprises in its story, about a hard-boiled convict (Ginger Rogers) who may or may not risk her life by testifying against a boss racketeer...

Rogers' mannerisms can sometimes be a little actorly, but Tight Spot is a solid drama and the chemistry between Ginger Rogers and Brian Keith is palpable.

Suffers from staginess, predictability, and an essentially weak heart.

Ginger Rogers should stick to Fred Astaire musicals--she was miscast as a smart talking jailbird.

Tight little crime drama. A B-movie in its day, second tier movies today can only wish for a cast like this.