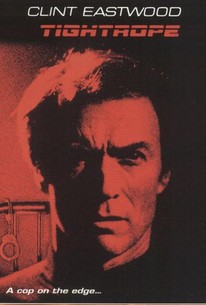 Clint Eastwood plays a New Orleans detective determined to track down a serial killer of prostitutes. Complicating matters is the fact that the unknown culprit is very likely an S&M fetishist....and so is Eastwood. The detective is profoundly disturbed at the likelihood that he and the killer have the same taste in women; this element of the case is equally troublesome for psychologist Genevieve Bujold, who finds herself attracted to Eastwood. The climax involves the killer's attempting to throw Eastwood off the track by kidnapping one of the detective's two daughters (played quite well by Clint's real-life daughter Alison).

Rebecca Clemons
as Girl with Whip

Tightrope may appeal to the Dirty Harry fans, with its sex and violence. But it's a lot more ambitious than the Harry movies, and the relationship between Eastwood and Bujold is more interesting than most recent male-female relationships in the movie.

On an action fan's gut level, I like Eastwood. There's no other star who can pull off tense, John Wayneish moments so well.

A sharp-edged slightly offbeat crime thriller for the masses.

Eastwood took a chance at the height of his stardom to play a less-than-heroic cop in this gutsy serial-killer thriller.

Film noir at its best, with an intriguing blend of law and order, sin and sex, violence and sado-masochism.

A dark, stylish, unique and chilling film noir at it`s best. A taunt, well-crafted and superb mystery thriller that takes back to the old school cop films of the 40`s and 50`s. A gripping, disturbingly compelling and first-rate edge of your seat thriller. Clint Eastwood gives one of his finest performances ever.

Very slow moving, a sort of dark, seediness to it, watchable, but forgettable.

Watching this flick was a tightrope experience in itself!!!

Some Spoilers Here ********************************************************* This is one of my favorite Eastwood films that has kinda slipped under the radar and been overshadowed by his more well known films like Dirty Harry and A Fistful Of Dollars. In this film Clint Eastwood plays New Orleans police detective Wes Block who's attraction for what's weird and strange in women that he occasionally picks up in the city's red light district, to have a romp in the hay with. This leads to him suffering from a very bad case of guilt when the very same women that he has sex, as well as S&M sessions, with end up brutally murdered. Divorced and living with his two young daughters Amanda & Penny, Alison Eastwood & Jenny Beck, Wes seems to have developed this behavior after his wife left him and has a hard time trying to keep it from both his children and fellow policemen that he works with.Being put on the handcuff and red lace serial murder case Wes slowly begins to notice that the killer somehow knows, or is observing, him. As almost all of the women that he has relations with, streetwalkers and call girls, end up being strangled to death with the same type of lace. It's as if the killer is trying to leave a massage to the New Orleans Police in general and Det. Wes Block in particular. Your, as well as Det. Block are kept guessing to who and what this maniac is really all about and we keep getting clues all throughout the movie about him and what Wes had to do with his murders. It's not until almost at the end of the movie "Tightrope" Wes learns that he had an encounter with him years ago that put him behind bars for eleven years. Now out of jail he's obsessed to reap havoc on not just Wes but his family as well as Wes' new girlfriend the supervisor of a local rape prevention center in the city. Always a step ahead of the police and Det. Block the killer attempts to kidnap Wes' daughters and gets as far as murdering their nanny Mrs. Holstein, Margie O'Dair, and almost strangles Wes whom he takes by surprise. Wes is saved by one of his, and Amanda and Penny's, four dogs who rips a piece of flesh out of the killers leg. Wes then seems to come apart when he feels that he let both himself and his family down almost tearing his entire bedroom apart in a wild fit of anger. Knowing that the killer will strike at Wes girlfriend Beryl next since, with the exception of his daughters, she's the closest person to him the police and Det. Block set a trap for him. This is a challenge that the killer eagerly accepts murdering three policemen who were on petrol outside of Bryal home. It's Wes who comes to the rescue, after Beryl escaped from his grasp by stabbing him, and has it out with the deranged madman at the railroad yard. Unusual Eastwood action/thriller with him being a man with his share of fears and hang-ups that makes him far more interesting and human than most of the roles he has played in his film career