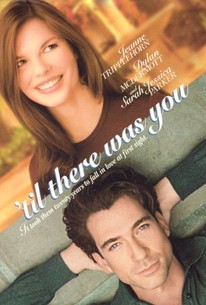 Critics Consensus: Utterly bereft of romance or humor, 'Til There Was You is a singularly misguided attempt at romantic comedy.

Critics Consensus: Utterly bereft of romance or humor, 'Til There Was You is a singularly misguided attempt at romantic comedy.

Critic Consensus: Utterly bereft of romance or humor, 'Til There Was You is a singularly misguided attempt at romantic comedy.

This romantic comedy is the first film from two television veterans, writer Winnie Holzman and director Scott Winant. Gwen Moss (Jeanne Tripplehorn) is a writer working on the life story of former child actress Francesca Lanfield (Sarah Jessica Parker), who is recovering from drug addiction. Nick Dawkan (Dylan McDermott) is an architect working on a housing development that will require razing Gwen's beloved vintage apartment. Gwen frequently visits a restaurant designed by Nick, but she never meets him. In the meantime, she is romantically rebuffed by a college professor (Ken Olin), who reveals that he is bisexual. Eventually, Gwen's crusade to save the apartment complex, which is owned by Francesca, attracts the attention of Nick.

Michael Tucker (I)
as Saul

Cinders Forshaw
as Himself

Ron Jeremy
as Waiter With Tray

Annabelle Gurwitch
as Woman in Bathroom

News & Interviews for 'Til There Was You

View All 'Til There Was You News

Critic Reviews for 'Til There Was You

I had mixed feelings about the slow ride, but one thing is certain: This film could have been a lot stronger if it was a lot simpler.

It tries for fizzy, but there's hardly a bubble in it.

When will someone realize that sexy Sarah Jessica Parker is pure comic gold and start writing movies that give her a chance to glisten? She's the only spice in this too-sweet romantic comedy.

Alas, first-time director Scott Winant and screenwriter Winnie Holzman rarely get beyond the cuteness of the story's structure.

I was not surprised to discover in the press notes that the movie ''has a touch of autobiography.'' The film's irritating insistence on parading its sensitivity gave the game away.

With its clotted script, art direction that's all splash and no style, and dialogue that's too nakedly calculated to facilitate identification), this tedious and confused movie points several characters in obvious directions.

Very little is amusing in all of this; the lighting is murky, the sound is mumbly, and will someone please tell the piano player to knock it off?

Its stars, young, sexy performers all, deserve a better vehicle.

The woeful miscasting of Jeanne Tripplehorn sabotages this romantic comedy about two people who are destined to meet but who contrive to keep missing each other.

Coincidence follows coincidence as the story moves predictably toward its pre-determined ending. But not before Winant and Holzman parade an annoying array of thinly drawn eccentrics and weirdos across the screen by way of fleshing things out.

'Til There Was You is a rarity -- a film in which absolutely nothing works. Nothing. Not one redeeming performance. Not one convincing moment. Not one solid laugh.

Audience Reviews for 'Til There Was You

'Til There Was You Quotes