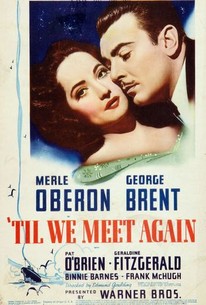 'Til We Meet Again Photos

'Til We Meet Again is an inflated remake of 1932's One Way Passage. As in the original, the hero is a convicted murderer en route to the death house by way of a merchant ship; the heroine is suffering from a terminal illness. Once more, hero and heroine fall in love, each keeping the facts of his or her imminent doom from the other. The principal difference this time is that instead of William Powell and Kay Francis, the stars are George Brent and Merle Oberon. This cast change does no damage to the basic storyline, but the decision in 'Til We Meet Again to expand upon the secondary romance between the arresting detective (Pat O'Brien) and an accomplice of the condemned man (Geraldine Fitzgerald) throws the focus of the film completely out of kilter. One decided benefit to both One Way Passage and 'Til We Meet Again is the comic presence of Frank McHugh, who plays the same role--a tipsy pickpocket--in both pictures.

Doris Lloyd
as Louise the Maid

Lynn Merrick
as Her Daughter

William Gould
as Chief of Police

Critic Reviews for 'Til We Meet Again

There are no critic reviews yet for 'Til We Meet Again. Keep checking Rotten Tomatoes for updates!

Audience Reviews for 'Til We Meet Again

Classy, richly appointed remake of One Way Passage is close to a scene for scene remake but the talented cast manage to make it fresh. Brent is less stolid than usual and he and Merle make a handsome couple surrounded by a terrific group of character actors. Eric Blore is amusing as usual in a small role, Pat O'Brien full of quiet integrity as George's minder and Geraldine Fitzgerald is lovely and solid in a small role as a newlywed. But the real standouts are underappreciated Binnie Barnes as a conwoman who has a past with Brent and most of all Frank McHugh as his loyal tippling friend, he manages to make a stock character very human.

'Til We Meet Again Quotes