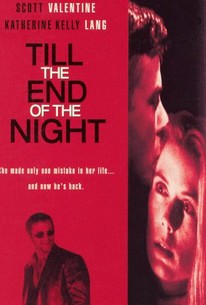 When John Davenport (Scott Valentine) married his lovely wife, Diana (Katherine Kelly Lang), he was totally unaware that she had been wed before. And beyond that, John had no idea that Diana's ex-husband, Drew D'Arcy (John Enos III), is a dangerous psycho. But Davenport soon wises up when, with help of a phony parole office, Drew begins stalking Diana and ultimately kidnaps her. Alerting the authorities to this abduction, John finds that no one will believe him -- especially since he himself has recently been implicated in a murder. Thus, John must tackle the challenge of rescuing Diana himself, leading to a nail-biting climactic showdown in the desert. For all its melodrama and grimness, this film has as astonishing amount of humor, mostly invested in the "sick" comments made by Drew D'Arcy and his partner in crime. Originally filmed for theatrical play but ultimately released directly to home video, Till the End of Night made its TV debut courtesy of the Lifetime cable network.

Raymon Hanis
as Clerk
View All

Critic Reviews for Till the End of the Night

There are no critic reviews yet for Till the End of the Night. Keep checking Rotten Tomatoes for updates!

Audience Reviews for Till the End of the Night

There are no featured audience reviews yet. Click the link below to see what others say about Till the End of the Night!

Till the End of the Night Quotes