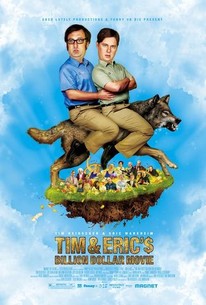 Critics Consensus: Tim & Eric's Billion Dollar Movie is on a gleeful quest to repulse audiences, but sometimes less is more with this sketchy duo.

Critics Consensus: Tim & Eric's Billion Dollar Movie is on a gleeful quest to repulse audiences, but sometimes less is more with this sketchy duo.

Critic Consensus: Tim & Eric's Billion Dollar Movie is on a gleeful quest to repulse audiences, but sometimes less is more with this sketchy duo.

An all new feature film from the twisted minds of cult comedy heroes Tim Heidecker and Eric Wareheim (Tim and Eric Awesome Show, Great Job)! Tim and Eric are given a billion dollars to make a movie, but squander every dime... and the sinister Schlaaang corporation is pissed. Their lives at stake, the guys skip town in search of a way to pay the money back. When they happen upon a chance to rehabilitate a bankrupt mall full of vagrants, bizarre stores and a man-eating wolf that stalks the food court, they see dollar signs-a billion of them. Featuring cameos from Awesome Show regulars and some of the biggest names in comedy today! -- (C) Magnet Releasing

Tim Heidecker
as Himself

Eric Wareheim
as Himself

Bill A. Jones
as Serious Announcer

Marilyn Porayko
as Woman Being Ticketed

Tennessee Winston Luke
as Himself

Robert Axelrod
as Himself

Ted Neubauer
as Man on Street

Dena Roe
as Woman on Street

James Quall
as Himself

David Liebe Hart
as Himself
View All

The laughs dry up even as the gross-out material grows more, uh, fluid.

Had Billion Dollar Movie been just eight minutes on the Funny or Die website, where Heidecker and Wareheim have often appeared, it might have worked.

The vicious mirth is hit-or-miss but contagious.

To quote an SNL sketch featuring costar and producer Will Ferrell, I don't think that legally this qualifies as cinema.

Most of the Saturday Night Live-inspired movies proved that a joke that's funny in a five-minute sketch often isn't when it's stretched out to 90 minutes. Tim and Eric doesn't suffer from that problem.

More-or-less abhorrent swill; vapid, painful and moronic in the way it treats its audience.

"Tim and Eric's Billion Dollar Movie" - I deserve a billion dollars for sitting through it!

Tim and Eric are more tolerable in small doses. When they try to stretch their shenanigans to a feature-length format, the results are even more nonsensical-and even more antagonistic.

If you're one of the many who just don't think [Tim and Eric are] very funny, there's little here that will change that opinion.

a strange cross between Get Shorty and Office Space, yet having its own unique flavor

After watching many of their skits through the years, I was very anticipated to see "Tim and Eric's Billion Dollar Movie," but I must say, that even though I had a blast watching this movie, it is nothing compared to the hilarity of their show. This film gives them an actual plot which takes you out a bit, because their shows has all been about randomness. To be honest, I do not even think a feature film was necessary, but it was inevitable I guess. The writing in this film almost seem absent at times, which is fine, because that is pretty much what their show is, but the jokes are very hit and miss. Since everything in this film was intentional, I will give them major props in pulling it all off. I am not a huge fan of this film, but I really enjoy these guys!

Cult TV comedians Tim & Eric are given a billion dollars to try to make a movie, squander it on hairdos and personal assistants, then try to make up the balance for their vicious corporate backers by rehabilitating an abandoned shopping mall overrun by wolves. Tim & Eric's awkward brand of meta-humor is often fascinating, but the mean-spirited grossout jokes clash with and ultimately overwhelm the clever avant-garde jokes, making the movie something of a missed opportunity for the absurdist comedy cause. John Waters would approve, however.

Tries too hard to be a movie, and forgets to do exactly what makes the show so great - forgoing conventional structure of any kind. As a result, Billion Dollar Movie is incredibly unfunny and woefully boring.

The list of adjectives that this film inspires is long: immature, stupid, dumb, juvenile, spastic, revolting, incongruous, nihilistic, garbage...but in a good way. Tim and Eric step out of the shadow of their tremendously nerdy and semi-popular show on Adult Swim. With a thoughtless script and a moorless decision to forgo their usual style, the film is a bland imitation of lesser comedies. Most of this instead hinges on our two protagonists, Tim and Eric. Both are interesting, creepy heroes, with their own seamless comedy, but they couldn't hold the massive responsibility of what this film requires. It's in the same vein as the adapted Reno 911! film, but with much more freedom now that they are away from television. Most of the hideous plot is nicely covered by a set of out of this world hilarious celebrity cameos from such greats as Zach Galifanakis as a fake guru, Will Ferrell as a crazed mall owner, and John C. Reilly as a gimpy invalid janitor who becomes the twosome's best friend and guinea pig. What I can say about it, in a positive way, is that it's surprising in places, and all for the right reasons. Certain important people die, cameos seem to be cut shorter than need be, love interests are far less clichÃ (C)d, even for the dumb comedy genre that this falls into, and it works well most of the time. Though it wasn't all too funny, not too interesting or smart, it did have its moments, its cavalcade of cameos and some strong jokes here and there, mostly cemented between gross out gags and mindless idiocy. It's best to watch their show beforehand, or Check It Out!, which is another one of their shows with John C. Reilly, which is their best work. (I think anyway.) Good for a mindless hour and a half at best.