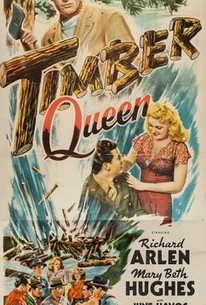 Timber Queen is another of Pine-Thomas' rugged low-budget adventure films of the 1940s, most of which (like this one) starred Richard Arlen. It all begins when Russ (Arlen), a former Army pilot, comes home after a physical discharge. He befriends Elaine (Mary Beth Hughes), the widow of an Army buddy, who has inherited a financially-strapped timber camp. Elaine's financial future hinges on a huge timber shipment, which must arrive at its destination On Time-and that's where Russ and his little airplane come in. Sheldon Leonard is his usual surly self as Smacksie, a reformed racketeer who helps Russ complete his mission.

Jimmy Ames
as Strudel
View All

There are no critic reviews yet for Timber Queen. Keep checking Rotten Tomatoes for updates!

There are no featured reviews for Timber Queen at this time.