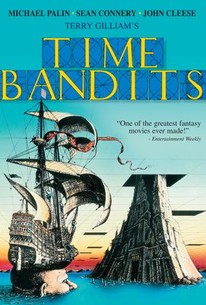 A young boy joins a group of renegade dwarves on an unpredictable journey through time in this humorous fantasy. Monty Python animator Terry Gilliam mostly achieves a tricky balancing act in his second feature as sole director, creating a dark, irreverent comedy disguised as a family adventure. Particularly amusing are the boy's encounters with various historical figures, including an entertainment-starved Napoleon (Ian Holm), a powerful Agamemnon (Sean Connery), and a surprisingly stuffy Robin Hood, embodied by Gilliam's Python cohort John Cleese. Episodic by nature, the film is less successful when dealing with the larger narrative, which concerns the pursuit of the dwarves and their time-traveling map by the Supreme Being. However, the combination of Gilliam's visual exuberance and the witty script (by Gilliam and Michael Palin) ensures an entertaining, if erratic, journey.

Tony Jay
as Supreme Being

Apple Original Series Currently in Production or Development
Character Face-Off: The Best Version of 15 Mega Popular Movie and TV Characters
Three Family-Friendly Fantasy Films That Are More Magical than A Wrinkle in Time

The film lacks what Garland, Lahr, Haley, Bolger, et al, had in abundance: humanity and charm.

Time Bandits is one of Gilliam's more chaotic films, which is really saying something, but his six time-bandits fill the screen with fractious energy.

Adults will get this movie, but kids won't.

When you can count the laughs in a comedy on the fingers of one hand, it isn't so funny.

The film is resolutely, passionately antiadult, yet much of the humor has an adult sophistication and edge to it; this is one kids' movie that doesn't condescend.

For a kids film this is pleasingly dark with Gilliam delivering as much classical fairy tale as knockabout comedy.

Time Bandits is rife with visual, physical and thematic exaggerations that stretch the boundaries of cinematic conventions to form a crazed comedic concoction.

Many of the exploits are lightly engaging, but never full of the tension and excitement of more polished adventure films.

For the most part Time Bandits goes its charming, merry way weaving much hilarity as it does, until the movie careens to its twisted, unorthodox ending.

Terry Gilliam has crafted a story so full of illusions that continuously surprise the audience. [Full Review in Spanish]

It's a strange and weird and wonderful mix of boy's own adventure, Python-esque humor, and grim irony, all wrapped in tall tales, ancient myths, and historical figures.

Gilliam opts for an acerbic and often nasty tone that risks offending the very audience at which it purported to be aimed.

Is Terry Gilliam riding on the coattails of Monty Python with this film? his cast does include a few Python members in small cameos and the films direction is most definitely bizarre. Not only that but the film looks and sounds like a Python sketch in various places much like 'Jabberwocky' did. Not complaining just pointing it out, love the film title though and those lovely looking opening credits. The first film in Gilliam's off the wall dream-like fantasy film trilogy where the plot basically revolves around escaping reality through imagination...or a dream. In this surreal adventure a young boy is zapped through time with the help of a bunch of dwarfs. This little team go around pinching loot trying to get rich with the aid of a map that shows them time holes to jump through time. On their tail is an evil sorcerer who wants the map for evil purposes and the maps owner the 'Supreme Being' (God?). The film starts off in a very simple manner that is quite enjoyable. Its very similar to the later Bill and Ted franchise as we jump to the Napoleonic Wars and meet Napoleon, then to England meeting up with Robin Hood and then to Greece meeting King Agamemnon. These few segments are good fun showcasing the films main big name cameos such as a rather dull Connery as Agamemnon, a very good Ian Holm as the height obsessed Napoleon and the brilliant Cleese as a rather stiff upper lipped Robin Hood and his cutthroat band of merry men. The Robin Hood sequence is easily the best with Cleese donning a daft over sized green Hood hat and typical cliched Hood attire. He looks utterly ridiculous in his pantomime garb where as in contrast his men are a bunch of dirty filthy violent scum. The other funny angle is the fact Cleese speaks quite normally in his aloof aristocratic manner and his men don't, they are just your standard commoner oiks. Once we are introduced to the villainous 'Evil' (that's his name) who wants the map things kinda nose dive in my opinion. The dwarf team stop time jumping and instead go on the run from Evil but end up in Evil's realm and things just become all too weird. There are some nice moments that are typically Gilliam in visual style and idea, the galleon perched on top of the underwater giants head is a good one. No real clue what the hell was going on there, why the galleon is stuck to this giants head (it appeared to be his hat), why the giant was under the sea and who or what was in that little cottage before the giant crushed it??. Looked like some kind of elephant alien person, quirky little moment but totally off the wall, they just get killed then?. The entire final sequence where the dwarfs and little boy fight against Evil is just a mess really. This sorcerer is obviously pretty invincible yet the dwarfs conjure up all these pointless character from various time periods to fight him. I know its a young persons film but this battle is really quite hokey. Then in the end we meet the Supreme Being who turns out to be (or at least in human form) an elderly man in a suit who can't really act too well, nice concept though. I think the main thing that I disliked in this film was the little boy in the main role. This is an old film sure and the kid actor didn't have to be a great actor I admit but damn he's fudging annoying. His soft weedy whiny voice just grates the whole time and fails to give his character any impact at all, he always begs and pleads like a baby but you can hardly hear him half the time because he's so quiet...and wet. Am I being harsh? maybe, but this kid ruins the film, should of used a girl. The squad of dwarves are the films main hook really...much like 'Willow'. None of them are particularly good actors but they are amusing and they do add to the fantasy charm. Seeing them all dressed up in their nifty warrior-like bandit outfits is kinda cool, clearly Gilliam (or someone) had this idea and knew they had to make a film around it. The film is essentially a kids flick, an imaginative adventure for young boys who like to play war, knights, cowboys etc...In that sense the film does its job and delivers a highly imaginative yarn no doubt. As an adult watching now the film doesn't quite hit the mark for me anymore, I guess the thrill has been left behind with age coupled with the fact the film doesn't really look very good anymore. It has dated quite badly in all honesty and the effects can be a bit dodgy. Like I said the first half set in the few time periods is good but after that it gets a bit rough around the edges. The very end feels too open ended also, definitely needed a more conclusive finish. In the end the film is a fun little ride with some nice visual ideas, but I can't help but feel without those few Python cameos this film wouldn't be half as much fun. You could say its only worth watching for the John Cleese sequence really...but that's just me.

No Terry Gilliam film is without its flaws. His work is usually fleeting and nebulous within the confines of the narrative, which is usually whimsical in nature. Out of all of his work, I'd say that Time Bandits is his most accessible... and certainly his most successful with audiences. It's the kind of movie you would not have just taken your kids to see, but to see it yourself too. It's true that it's a bit more adult than a normal kids movie, even from this time period, but it has elements contained therein that make it feel more magical. I like it a lot, and I'm glad that it enjoyed a successful run upon release. I also hope that Terry Gilliam gets to make more films like it in the future. He's a frustrating director for a lot of people, but his work speaks for itself.

A spectacular fantasy for children and adults alike.

Five dwarves, bored with their everyday tedium, steal a map from God Himself and take it on the lam with hopes of using the purloined item to secure the usual: riches beyond their wildest dreams. And so the madcap chase is on through space and time, a bright youngster nabbed along the way simply for the helluvit. Will they get the moolah? And just who is that guy chasing them in the red tights who's laughing maniacally all the time? A treat for the kiddies that won't bore you to tears.