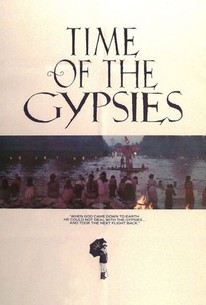 Time of the Gypsies Photos

Perhan (Davor Dujmovic) is a Gypsy teenager with the ability to move objects with his mind. A criminal named Ahmed convinces him to leave his devoted grandmother (Ljubica Adzovic) and loving girlfriend, and to use his powers to make some money illegally. While becoming a man and learning the trade of crime, the boy searches for his sister (who was supposed to have a leg operation) and tries to save money to realize his fantasy of returning home to marry the woman of his dreams. This film won Emir Kusturica an award at the 1989 Cannes Film Festival for his direction and was the first feature to be filmed with its entire dialogue in the Gypsy language, Romany. ~ Perry Seibert, Rovi

Critic Reviews for Time of the Gypsies

In a way, the very richness of the film is a handicap. There are so many people here, and so many places and things happening to them, that it is possible to lose track of some of them on a first viewing.

Audience Reviews for Time of the Gypsies

There are no featured audience reviews yet. Click the link below to see what others say about Time of the Gypsies!

Time of the Gypsies Quotes