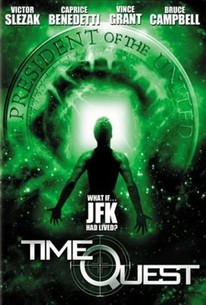 More than a decade after his directorial debut, Moontrap, visual effects artist Robert Dyke took his second turn behind the camera as writer and director of this science fiction drama. Time Quest both asks and answers the question of what would have happened had President Kennedy (Victor Slezak) not been assassinated while riding in a Dallas motorcade, when a time traveler played by Ralph Waite (The Waltons) ventures back to November 22, 1963, and prevents the murder. The film also stars Caprice Benedetti as Jacqueline Kennedy and Vince Grant as Robert F. Kennedy.

There are no critic reviews yet for Time Quest. Keep checking Rotten Tomatoes for updates!

Oh wow does this movie suck! Honestly I had to turn it off after about an hour, I just couldn't take it any more. Maybe eventually I'll go back and finish it. I love Bruce but even he can't save this movie.