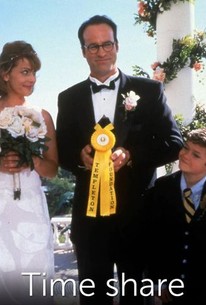 Also known as Bitter Suite, the made-for-cable romantic comedy TimeShare is predicated on the premise that two extremely different people have been booked to occupy the same California house at different times of the year. The inevitable mix-up in scheduling occurs, forcing humorless German scientist Julia Weiland (Nastassja Kinski) to spend the summer under the same roof with divorced chef Matt (Timothy Dalton). Not surprisingly, this is an oil-and-water combination, made worse by the endless bickering between Julia and Matt's equally ill-matched children. Will True Love eventually prevail over divergent personalities--and what of Julia's "Ralph Bellamy" boyfriend, stuffy bioengineer Russell (Geoffrey Lower? Filmed on location in Malibu, TimeShare debuted June 18, 2000, on the Fox Family channel.

There are no critic reviews yet for Time Share. Keep checking Rotten Tomatoes for updates!