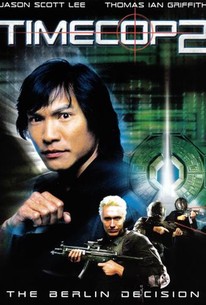 Jason Scott Lee portrays the title character in Stephen Boyum's time-traveling action film Timecop 2: The Berlin Decision. The film follows the timecop as he jumps from various eras in history in an attempt to stop criminal Branson Miller (Thomas Ian Griffith) who has been manipulating history for his own personal gain.

...a perfect example of a needless sequel.

Bad Movie fans who chuckled at the original Timecop will chuckle here as well, but those looking for quality sci-fi or workable action should look elsewhere.

While I loved the idea behind Timecop, I hated the first movie. I thought it was really poorly done. With such a great idea, there were so many different directions the writers could have gone in, and the one they chose was just sloppy, however they made up for that in the second one. Too bad it was done in a low budget, direct-to-video film, that starred absolutly no one of any name recognition. In the second installment of Timecop, Anti-Government Terrorists want to change the United States to make it more like the way they want it to be, and the only thing stopping them is The Time Enforcement Commission. Led by former agent, Brandon Miller (Thomas Ian Griffin), the terrorist decide to go back and take out the agents before they are able to defend themselves, with them out of the way, they'll be able to do anything they want, but the only thing stopping them is Ryan Chan (Jason Scott Lee) The top Timecop, who they thought had been stranded in the past. The story here is much better than it was in the first film and much more what I expected to see. In ninety minutes, we go from the roaring twenties, to the wild west, and even Nazi Germany on this amazing chase through time. The film is however lacking in several ways, most important of all the cast. A low budget direct-to-video film means shotty special effects and worst of all a cast of actors no one has ever heard of. Jason Scott Lee stars, and while he has the moves, he butchers a lot of lines and really hasn't mastered emotions yet. As for his counterpart, Thomas Ian Griffin, he was kind of all over the place, so this was not the kind of film that will ever be used in an acting class, but by in large the story was enjoyable and does offer some redemption for a series that had so much promise.

Whatever happened to Jason Scott Lee? After Dragon, I thought his career would take off. But instead he's been doomed to a string of bad choices and straight-to-video fare. Timecop 2 is surprisingly one of the more watchable ones. The first half is pretty decent, and while the latter part of the film doesn't work as well, it does feature some good action sequences and makes me wish Lee got better roles.