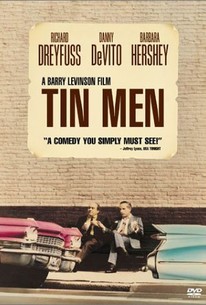 Michael Tucker (I)
View All

Because Tin Men is based on fundamental truth, it is able to be funny even in some of its quieter moments. The good jokes always hurt a little.

Despite having a lot of rich potential in its premise, it is closer to mediocrity. [Full Review in Spanish]

It captures the circularity and inconsequentiality of everyday speech, without flagging, and without becoming for a moment less than entertaining.

Levinson has an unerring eye for the trappings of the period, and like Diner, the supporting characters add a realism that is often forgotten in the 'big movie' mentality of the 80s.

The period comedy film is a rich character study that offers a ride as smooth as a Coupe de Ville.

Levinson's follow-up to Diner has strong characters, funny dialogue, and terrific ensemble, but the film is dramatically shapeless.

Primo Levinson. DeVito's rarely been more human, and Dreyfuss is at his funniest.

[font=Century Gothic]"Tin Men" takes place in Baltimore, 1963. Minutes after purchasing a brand new Cadillac, successful aluminum siding salesman, BIll 'BB' Babowsky(Richard Dreyfuss), gets into an accident with a rival aluminum siding salesman, Ernest Tilley(Danny Devito), driving his own Cadillac.(I always thought Baltimore was a fairly large city, myself.) Large egos are involved, so vengeance is sworn but since there is an absolute lack of maturity, it's not really in an Old Testament kind of way.(If this was a less civilized time, then dueling would have definitely been an option.) The stakes are raised and this comes to include Tilley's neglected wife, Nora(Barbara Hershey)...[/font] [font=Century Gothic][/font] [font=Century Gothic]Writer/director Barry Levinson has a great eye for detail but the story is broadly drawn and hardly believable. For example, Babowsky is nearing middle-age and a bachelor when such things were frowned upon. (I found it hard to believe that in 1963 nobody was talking about starting a family and all of the men seem interested in living a mythic "Rat Pack" kind of lifestyle.) And I have no sympathy for a group of grown men who act like 10-year olds. All of which is a shame because a great supporting cast including John Mahoney, JT Walsh and Seymour Cassel is wasted. Barbara Hershey is by far the best thing in "Tin Men" but she is not in enough of the movie. [/font]