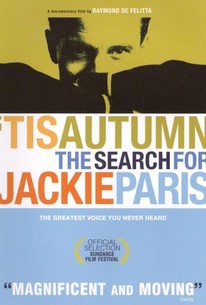 In the 1950s and '60s, Jackie Paris was one of the most celebrated jazz vocalists of his generation; he collaborated with such giants as Charlie Parker, Charles Mingus, and Dizzy Gillespie, he was a favorite of leading music critics, and recorded for such top jazz labels as Impulse and East-West. But ten years on, Paris had fallen so far off the radar that a major jazz reference work reported that Paris had died in 1977, even though he was still around and occasionally performing at the time. In the 1990s, filmmaker Raymond De Felitta heard some of Paris' recordings and became an instant fan, and was deeply curious about Paris' life and career, and how an artist with such gifts had become little more than a footnote in music history. De Felitta's search eventually led him to Paris himself, and a fascinating story of bad luck, a wildly dysfunctional family, dangerous pride, a hair-trigger temper, and a remarkable voice that somehow survived it all, even if his career did not. 'Tis Autumn: The Search for Jackie Paris is a documentary which chronicles De Felitta's search for the elusive singer; the film includes interviews with Paris' family, friends, and fans, including Dr. Billy Taylor, Billy Vera, Joe Franklin, Ira Gitler, Harlan Ellison, and James Moody. Frank Whaley, Nick Tosches, and Peter Bogdanovich contribute dramatic readings of reviews of Paris' work from his heyday.

News & Interviews for 'Tis Autumn: The Search for Jackie Paris

View All 'Tis Autumn: The Search for Jackie Paris News

Critic Reviews for 'Tis Autumn: The Search for Jackie Paris

At times fascinating, but De Felitta's presentation is sometimes a little skewed.

It's a fascinating tale that reveals as much about the cutthroat nature of the music biz as it does about this witty, nostalgia-prone elder statesman.

Paris himself is a tight-lipped interviewee of the old school; that all changes the moment he steps on stage, when we see what they have all been talking about.

Annoyingly, Raymond de Felitta intrudes into his own movie, yet he also makes the case that here was a distinctive if wayward talent.

"How come we never heard of him?" you cry. Deep mystery. But it develops an unexpected power in the final reels, when skeletons fairly rattle out of cupboards.

A striking portrait of the price of fame and the transience of the music business spotlight.

Pit him against an inexperienced documentary-maker and the result is an often hilarious hotchpotch of cack-handed research and dim-witted interview techniques.

While Paris' singing features large, not just jazz fans will be moved by this personal, devastating portrait.

Fascinating, well made and ultimately moving documentary that works on several levels and delivers a powerful emotional punch.

De Felitta makes a strong case for Paris's greatness simply by cramming the soundtrack with cuts from the singer's sporadic five-decade discography.

A posthumous probing of the psyche of a musical genius who could swing and sing, but who was also prone to someself-destructive behavior, daddy-o!

There are no featured reviews for 'Tis Autumn: The Search for Jackie Paris at this time.