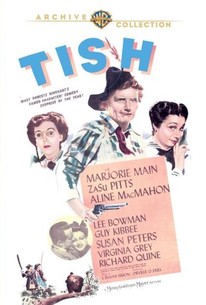 Raw-boned, raspy-voiced, sixty-something Letitia "Tish" Carberry (Marjorie Main, who would find her greatest fame in the Ma Kettle film series) comes back to her hometown with a baby in her arms. "I'm a woman. It's a baby. It's mine!" she declares. Three splendid character actresses - Main, Zasu Pitts and Aline MacMahon - play three delightful spinsters in Tish, based on stories by Mary Roberts Rinehart. The old dears try their hands at matchmaking, get everything in a dreadful muddle, and end up caring for an orphaned baby they mistakenly believe is illegitimate. This warm comedy is laced with drama and punctuated with plenty of sight gags, including Main roller-skating in her Sunday best and the three stars tangling with a disgruntled bear on a camping trip.

There are no critic reviews yet for Tish. Keep checking Rotten Tomatoes for updates!

There are no featured reviews for Tish at this time.