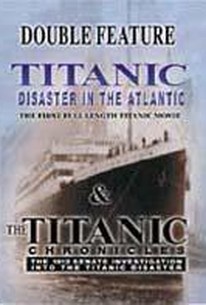 Nearly 70 years before James Cameron made the Titanic tragedy his own personal property, E. A. DuPont offered his own spectacular spin on the same story in the landmark early talkie Atlantic. Adhering to the classic three-act structure, the first portion of the film concentrates on the passengers -- both above and below deck -- of a huge luxury liner on its maiden voyage. The middle portion deals with the liner's collision with an iceberg and the reactions of the passengers, ranging from mild annoyance to outright panic. Dupont reserves the best for last, as the great ship Atlantic begins its final descent amidst the terrified cries of the passengers as they try to crowd into too few lifeboats. Stalwart courage and craven cowardice come head to head in the climactic scenes, but in the final summation it is the special effects, rather than the behavior of the characters, that linger longest in the memory. Amazingly, the film fades before the ship sinks beneath the waves, which may be why Atlantic came nowhere near the box-office success of Cameron's Oscar-winning Titanic (besides, who had a billion dollars back in 1930?) In addition, too much time is spent on a comedy-relief steward, as if the death of the great ship was some sort of Broadway musical revue. Based on a stage play by Ernest Raymond, Atlantic was simultaneously filmed in English, French and German-language versions. ~ Hal Erickson, Rovi

Dupont's film is strong enough in texture to stand these faults, and more. It is thoughtful and simple, has rhythm and method, uses sound wisely and silence subtly.

There are no featured reviews for Atlantic at this time.