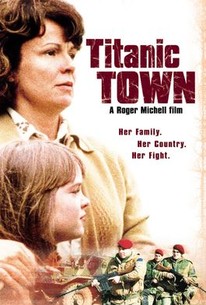 Roger Michell directed this British drama based on Mary Costello's autobiographical novel about a Belfast housewife and peace activist. During early '70s conflicts in Northern Ireland, Bernie McPhelimy (Julie Walters) and her family move into a Catholic neighborhood in a West Belfast town famed as the location of the Titanic's construction but now a battlefield of bullets, tanks, and helicopters. When one of Bernie's old friends is trapped in a crossfire and killed, she attends a women's peace group but finds their approach ineffectual. Despite the resentment of her family, objections from her husband (Ciaran Hinds), and community hostility, the determined Bernie organizes her own group, teaming with co-campaigner Deidre (Aingeal Grehan) to mediate between the British government and the IRA, eventually collecting 25,000 petition signatures to limit residential neighborhood fighting. Shown in the market section at the 1998 Cannes Film Festival.

Titanic Town has a few too many quiet moments, most of which go nowhere in particular.

A handsome and convincing picture of a region and people in turmoil.

Conveys the complexity of "The Troubles" in Northern Ireland and the bravery of one woman who tries to make a stand for peace.

Brings to the fore the day-to-day horrors of a Northern Ireland family forced to cope with British occupation better than any other I can remember.

There are no featured reviews for Titanic Town at this time.