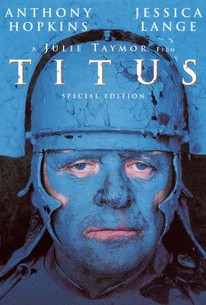 Critics Consensus: The movie stretches too long to be entertaining despite a strong cast.

Critics Consensus: The movie stretches too long to be entertaining despite a strong cast.

Critic Consensus: The movie stretches too long to be entertaining despite a strong cast.

In this epic tale of revenge, Anthony Hopkins stars as Titus Andonicus, the Roman general who sows the seeds of vengeance when he executes the son of the enemy Queen, played by Jessica Lange. The repercussions of his action are revealed when the vindictive woman becomes the new wife of the Roman Emperor.

A consistently absorbing entertainment that never becomes either campy or facetious, given its inescapable exaggerations.

A striking addition to the Shakespeare filmography.

Hopkins unwisely echoes his performance as Hannibal Lecter, but Lange rises to the occasion with a mesmerizingly in-your-face portrait of mother love gone haywire.

Along with everything else, the acting styles here clash, though the dissonance serves the drama's bellicose theme.

Eager to allow Shakespeare's words to shine through as clearly as possible, Taymor shoots the dialogue scenes fairly straight, with a minimum of background action.

Taymor understands how to direct an epic opera, and the large scale sensuality she embeds into the film tempers the play's worst impulses.

...audaciously steps outside of the tradition when it comes to film adaptations of the bard's works, but it also does so much more: notably, find distinct meaning in a play where all notions of importance lacked a central point.

This may just be the most striking and unsettling translation of Shakespeare ever committed to film.

It's hard to see it matching the success of other recent adaptations of the Bard.

At once mesmerizing and jarring to the point that the audience can never get comfortable in the film.

It's amazing how enjoyable Shakespeare can be when Kenneth Branagh isn't involved.

I was captured once tied and beaten for 3 days, I suffered less pain from that, then this movie. But it just goes to show you I WILL WATCH ANYTHING! Have to admit that the costumes were out of this world, and Anthony Hopkins proves he can play any part with 100 percent success, but I can only put one star on it, Now will someone take of these handcuffs and untie me.

OH EM GEE Julie Taymor. You too, Will. I've never read this Shakespeare play and after seeing this textually faithful adaption (from what I hear), I don't understand why the play isn't more popular. It's like Sin City set in the Roman Empire. Amoral people committing violent acts for violence's sake. Heroes brought down by tragic flaws of hubris and nearsightedness. Inexplicable sacrifice made in the name of honor, revenge, piety. And the dialogue is hella sexy: Chiron: "You have undone our mother." Aaron: "Villain, I have done thy mother." Taymor's mishmash of genres and periods is so convoluted, yet compelling. I could have done without the little boy guide though.