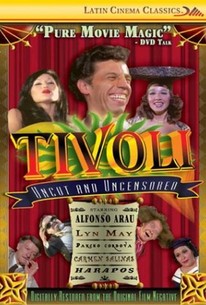 Actor and filmmaker Alfonso Arau stars in the period musical comedy about the last great days of burlesque in Mexico. In the early '50s, Jesus Quijano (Pancho Córdova) is the manager of a struggling burlesque theater in a decaying part of Mexico City, where his star comedian, Tiliches (Alfonso Arau), shares the stage with a variety of musical performers, variety acts, and exotic dancers, among them bitter rivals Mimi Manila (Gina Morett) and Eva Candela (Lyn May). When Quijano attempts to fabricate a phony public outrage over the theater's salacious stage show, the plan backfires after Reginaldo (Ernesto Gómez Cruz), an engineer with the city planning department, uses the "outcry" as an excuse to include the theater in a demolition program so the city can put in a new housing project. Quijano and Tiliches quickly put together an all-star benefit show in a bid to rescue the theater from the wrecking ball, but it may be too late to save the Tivoli. Famed Latin bandleader Pérez Prado appears as himself in the benefit show sequence. ~ Mark Deming, Rovi

There are no critic reviews yet for Tivoli. Keep checking Rotten Tomatoes for updates!

A look at the 40-50s cabaret world of Mexico, the struggles with the authoritarian and corrupt PRI-goverment of the time. In some ways this film feels like one of the founding fathers of the "ficheras" genre, but unlike most movies that would come after this Tivoli has an actual story, a good cast, and sure, lots of really hot women with no clothes on. So, it has a bit for everyone.