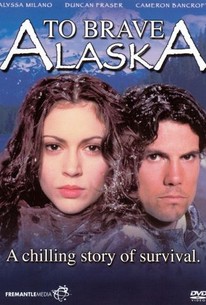 Yuppie couple Denise Harris (Alyssa Milano) and Roger Lewis (Cameron Bancroft) get it in their wee little heads to head off to Alaska, there to work a gold mine some 75 miles away from civilization, At first, Denise and Roger revel in their exotic new surroundings, but before long the weather goes from cold to really cold, the supplies run out, and all contact with the outside world is cut off. Are the two city-dwellers prepared to endure the ordeal of making their way back to town or will they end up a pair of frozen Yuppie-sickles? In one of the big dramatic moments, the starving Denise and Roger seriously consider eating their pet dog; one suspects that this idea is borne of jealousy, since the dog gives the film's best performance. Lensed on location in British Columbia, the made-for-TV To Brave Alaska originally aired November 3, 1996, on ABC.

Critic Reviews for To Brave Alaska

There are no critic reviews yet for To Brave Alaska. Keep checking Rotten Tomatoes for updates!

Audience Reviews for To Brave Alaska

A good try at a couple trying to survive a dream of living it rough in Alaska, Hey when you don't bath for a few weeks your supposed to look dirty, that says it all. If you have nothing better to do on Friday night then watch this movie you need to get a life.