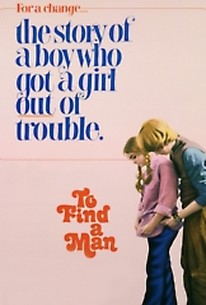 To Find a Man Photos

Screen newcomers Darren O'Connor (the brother of Glynnis O'Connor) and Pamela Sue Martin (billed here as Pamela Martin) play a pair of 16-year-olds, former childhood sweethearts and playmates from Manhattan's Upper East Side, who find their lives thrust back together when she becomes pregnant by the boyfriend of a friend's mother. O'Connor's Andy Morrison has always loved Martin's Rosalind McCarthy from afar, but she has always been too self-centered to notice or care, until she needs him "to find a man" to do the abortion. He tries to go about solving her problem his way, methodically and carefully, all the while doing his best to cope with her outbursts and her need to get the abortion while she's home for the week from the Catholic boarding school that she attends. They battle insensitive bureaucrats, hopelessly overburdened hospitals, and her pushy and dissipated parents, as well as Andy's class prejudices, and in the course of solving Rosalind's problem, each realizes that they've never really known or understood the other. ~ Bruce Eder, Rovi

Critic Reviews for To Find a Man

This is a constructive film with positive things to say about human values; its many flaws can't negate its vitally important statement.

There are no featured reviews for To Find a Man at this time.

To Find a Man Quotes