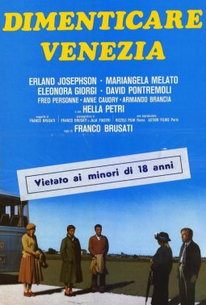 This effective drama about crisis and change in an unorthodox family is directed by Franco Brusati, best known for his earlier Bread and Chocolate. Marta (Hella Petri) lives in a large country estate after retiring from her career as an opera singer. She is not alone. Two women live with her, Claudia (Eleonora Giorgi) and Anna (Mariangela Melato), of uncertain familial ties, though perhaps nieces. Claudia and Anna are established in a lesbian affair and both depend on Marta like daughters would depend on a mother. Marta's brother Nicky (Erland Josephson) and his lover Picchio (David Pontremoli) arrive one day because Marta wants to take the two couples for a brief trip to Venice. Circumstances conspire to change those plans as one crisis after another, as well as a tragedy, make Claudia, Anna, and Nicky rethink their dependent behavior. ~ Eleanor Mannikka, Rovi

A rich, stirring and quite heartening film, a sophisticated work of affirmation.

To Forget Venice is an enchanting Italian film with eye inveigling visuals.

There are no featured reviews for Dimenticare Venezia (To Forget Venice) at this time.