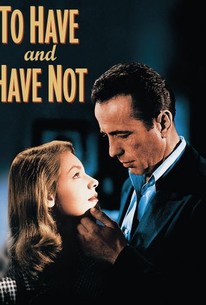 Critics Consensus: With Howard Hawks directing and Bogey and Bacall in front of the cameras, To Have and Have Not benefits from several levels of fine-tuned chemistry -- all of which ignite on screen.

Critics Consensus: With Howard Hawks directing and Bogey and Bacall in front of the cameras, To Have and Have Not benefits from several levels of fine-tuned chemistry -- all of which ignite on screen.

Critic Consensus: With Howard Hawks directing and Bogey and Bacall in front of the cameras, To Have and Have Not benefits from several levels of fine-tuned chemistry -- all of which ignite on screen.

To Have and Have Not Videos

To Have and Have Not Photos

Humphrey Bogart plays Harry Morgan, owner-operator of charter boat in wartime Martinique. Morgan's right-hand man is Eddie (Walter Brennan), a garrulous alky whose pet question to anyone and everyone is "Ever get stung by a dead bee?" While in port, Harry is approached by Free French activist Gerard (Marcel Dalio), who wants to charter Harry's boat to smuggle in an important underground leader. Adopting his usual I-stick-my-neck-out-for-no-one stance, Morgan refuses. Later on, he starts up a dalliance with Marie Browning (screen newcomer Lauren Bacall), an attractive pickpocket. In order to help Marie return to America, Harry agrees to Gerard's smuggling terms. He uses his boat to bring resistance fighter De Bursac (Walter Molnar) and De Bursac's wife Helene (Dolores Moran) into Martinique. The Vichy police, suspecting that something's amiss, hold Morgan's pal Eddie hostage, tormenting the poor rummy by denying him liquor. Predictably, Morgan comes to Eddie's rescue and manages to escape Martinique, with the delectable Marie as cozy company. In the hands of director Howard Hawks and screenwriters Jules Furthman and William Faulkner, the end result bore only a passing relation to the original story by Ernest Hemingway: instead, it was a virtual rehash (but a good one!) of the recently released Casablanca, replete with several of that film's cast members. The film's enduring popularity is primarily -- if not solely -- due to the sexy chemistry between Bogart and Bacall, especially in the legendary "You know how to whistle, don't you?" scene. The most salutary result of To Have & Have Not was the subsequent Bogart-Bacall marriage, which endured until his death in 1957. It's widely believed that Lauren Bacall's singing voice was dubbed in by a pre-puberty Andy Williams; this is not true. For the record, a more faithful-to-the-source cinemadaptation of the Hemingway original was filmed in 1950 as The Breaking Point.

News & Interviews for To Have and Have Not

View All To Have and Have Not News

Critic Reviews for To Have and Have Not

In many ways the ultimate Hawks film: clear, direct, and thoroughly brilliant.

Lauren Bacall has cinema personality to burn, and she burns both ends against an unusually little middle.

Asking an audience to laugh for two hours at the delirium tremens of a man suffering from alcoholism is a grisly thing.

Bogart is in his usual metier, a tough guy who, no less, has the facility of making a dame go for him, instead of he for her. That's where Bacall comes in.

Bogie and Bacall fell in love while making the film, and their scenes reflect this, giving To Have and Have Not a degree of emotional presence that is unusual in the 'bite on the bullet' world of Hawks.

[Bogey & Bacall's] onscreen chemistry is palpable, all but overshadowing the fictional back story that made Rick and Ilsa's dance in Casablanca so memorable.

Bogie and Bacall make an engaging onscreen duo, delivering their lines with just the right amount of cynicism and coyness.

The effortless chemistry between Bogart and Bacall help distract from the fact that To Have and Have Not has little more going for it.

A victory of style and star power over substance.

While there are moments implying breezy, spontaneous improvisation in virtually all Hawks pictures, no other has such an all-pervasive sense of a floating party...

Bacall slinks onto the screen asking Bogart for matches and walks away with the entire movie.

Audience Reviews for To Have and Have Not

Bacall exudes a lot of magnetism and sensuality in her debut on the screen, a decent sort-of-rip-off of Casablanca - based on Hemingway and co-written by William Faulkner no less - that relies on a strong chemistry between her and Bogart in their first of four films together.

See this Humphrey Bogart classic for two and only two reasons: To witness with your very eyes the incredible sexual chemistry between the legendary actor and his stunning co-star Lauren Bacall (who he met for the first time during the shooting of this film and then went on to marry), and for Walter Brennan's pitch-perfect performance as the likeable rummy Eddie.

The first of two classic films Howard Hawks did with Bogart and Bacall contains great dialogue and great performances.

Okay, it's true that this movie is reminiscent of Casablanca because Bogart starts out neutral towards WWII and ends up helping the resistance, but this movie is great too. I loved it and I recommend it.

To Have and Have Not Quotes