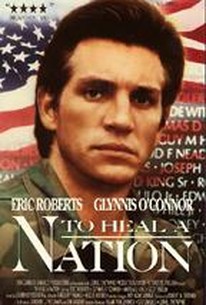 To Heal a Nation is the true story of Jan Scruggs (Eric Roberts), a decorated veteran of the Vietnam War. In 1979, Scruggs, employed by the US Department of Labor, becomes obsessed with the dream of erecting a monument to those who died in Vietnam. In pursuit of this dream, Scruggs and his fellow fundraisers run up against bureaucratic indifference and public hostility-not to mention the reservations of certain veterans who disapprove of the monument's "radical" design. On November 13, 1982, the Vietnam Veterans Memorial is erected in Washington DC-an intensely emotional moment, vividly recreated by combining dramatizations with actual news footage. Originally presented as GE Theater TV production, To Heal a Nation debuted May 29, 1988.

Mort Sertner
as Speaker
View All

Critic Reviews for To Heal a Nation

There are no critic reviews yet for To Heal a Nation. Keep checking Rotten Tomatoes for updates!

There are no featured reviews for To Heal a Nation at this time.

To Heal a Nation Quotes