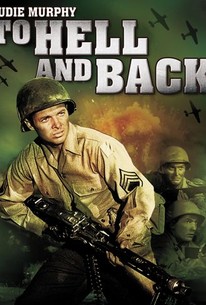 To Hell and Back Photos

The highly variable Audie Murphy delivers his best screen performance as "himself" in Universal's To Hell and Back. Based on the star's autobiography, this is the story of how Murphy became America's most-decorated soldier during WW II. After dwelling a bit on Murphy's hard-scrabble Texas upbringing, the story moves ahead to 1942, when, as a teenager, Audie joined the army. Within a year, he was a member of the 7th Army, serving in North Africa, Italy, France and ultimately Germany and Austria. One by one, the members of Murphy's Company B are killed in the war, until only three men from the original company are left (the others appear at the finale as ghostly images, a standard visual cliché of 1950s war films). The bulk of the film is given over to Murphy's conspicuous acts of combat bravery, and his killing of 240 enemy soldiers. Highlighted by excellent battle sequences, To Hell and Back is a serviceable tribute to a most complex individual.

Gordon Gebert
as Audie Murphy as a boy

John Bryant
as Jim
View All

Critic Reviews for To Hell and Back

Murphy is fine playing himself, although the way in which he purses his lips and stares steely-eyed at the enemy following each death of a friend reminds me of Bill Bixby's David Banner intoning, "Don't make me angry. You wouldn't like me when I'm angry."

Murphy playing himself is an oddity in a film of this type, but it seems to work.

A most pleasing biopic of a genuine WW11 hero.

Audience Reviews for To Hell and Back

Audie Murphy plays himself in this retelling of his incredible stand-alone heroism against a deadly Nazi advance during the Allied push to end WW2 in Europe. Unfortunately Hollywood and the U.S. Army do a little too much crowding to get into the picture, nearly crowding Audie out of it, in their bid to stand in reflected accomplishment. Still, the tale of a disadvantaged Texas youth who went on to exemplify American value stands untouchable.

A propaganda fest from beginning to end. To Hell and Back tells the story of Audie Murphy, the most decorated solider of WW2 and it stars Audie Murphy. The real Audie Murphy plays himself, in the story of himself kicking the crap out of Nazi's. If that sounds to you like the film with in a film from Inglorious Basterds, but American, you'd be correct. Nation's Pride was based on this film. As far as war films go it's not too shabby. I wouldn't rush out to see it, but worth a watch if you like the genre.

If one wasn't familiar w/ Audie Murphy's exploits in the European theatre during WWII, they'd think this just another Hollywood exaggeration of a few random acts. The reality is that this is a fairly accurate depiction of historical events, albeit 1955 Hollywood production values. If there ever was a story worthy of being retold, this is it. Any producers/directors out there listening?

To Hell and Back Quotes