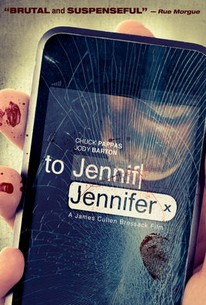 Convinced that his longtime girlfriend is cheating on him, heartbroken Joey recruits his cousin Steven to shoot a video that will prove her guilt. Before the video is completed, however, Joey and Steven uncover something so sinister is shakes them to the very core. The first feature to be shot entirely on an iPhone 5, To Jennifer is a relentless exercise in low-budget terror.

Critic Reviews for To Jennifer

Although [filmmaker James Cullen Bressack] had a really good concept here and a really good start and finish, what he failed to do was fill the middle with any great content whatsoever.

A scrappy, strange, and inconsistent little "gimmick" flick, but it's also a testament to what a small group of filmmakers can pull off with very little money

Audience Reviews for To Jennifer

There are no featured audience reviews yet. Click the link below to see what others say about To Jennifer!