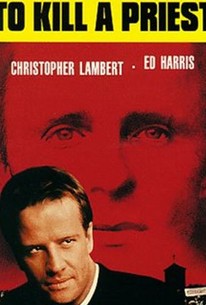 To Kill a Priest Photos

This internationally-produced political drama tells the tragic true tale of a Polish priest who is martyred for his defiant support of the Solidarity movement in 1984. The tale is set in Warsaw on December 24, 1981 when martial law has just been instated. Stefan, a devoted Party member and militia captain, leads a death squad assigned to execute the troublesome Father Alek, the out-spoken, charismatic supporter of Solidarity. Though Stefan has no choice but to follow orders, he cannot help but feel moved by the stirring words of the courageous priest.

Critic Reviews for To Kill a Priest

In short, this is not a bad film. But it isn't the one that could and possibly should have been made.

To Kill a Priest is a movie of great, almost crushing, sincerity, but it is so ineptly made that scene after scene strikes the wrong note, or no note at all.

The initial steps of To Kill a Priest are quite absorbing, generating an effective tension and historical purpose that sustains throughout the picture.

There are no featured reviews for To Kill a Priest at this time.

To Kill a Priest Quotes