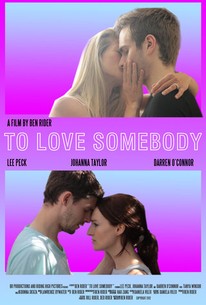 To Love Somebody Photos

TO LOVE SOMEBODY is a micro budget feature film which centers around two couples. The one couple, Meryl and Mike, are recovering from their youngest son's death, their estranged eldest and their inability to communicate. In the meantime the second couple, Joanna and Tim, are trying to have their first child, after several failed attempts, and are clearly avoiding some internal problems with each other. Through the span of the film's narrative, the couples contrast one another, quickly developing an intimate study of the separate stages of their relationships and human nature.

Critic Reviews for To Love Somebody

There are no critic reviews yet for To Love Somebody. Keep checking Rotten Tomatoes for updates!

There are no featured reviews for To Love Somebody at this time.

To Love Somebody Quotes