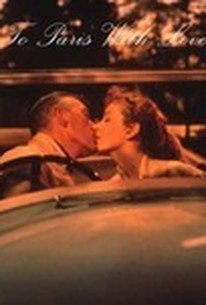 In this lively British romantic comedy, a baronet decides that his son needs to experience life outside of his blue-blooded world and so takes him to Paris to sample its earthy pleasures. Meanwhile, the son has his own plans; he wants to find his father a good woman because he believes his father has spent too much time cooped up on his lonely estate in Scotland. Many merry mix-ups ensue as the two well-meaning fellows try to find the right woman for the other. Fortunately, by the story's end, romance prevails and everybody involved is happy. ~ Sandra Brennan, Rovi

Jacques B. Brunius
as Aristide Marconnet

Critic Reviews for To Paris With Love

Delightful in spots, and on the whole worth seeing, although the fun slumps off badly toward the finish.

In the nature of a fairy story, this film lacks the courage to be one and weaves uneasily between the ponderously obvious and slapstick.

...at least it never offends, but it doesn't do much to amuse, either. It seems sort of a waste of Mr. Guinness's talents.

The comedy is strained.

There are no featured reviews for To Paris With Love at this time.

To Paris With Love Quotes