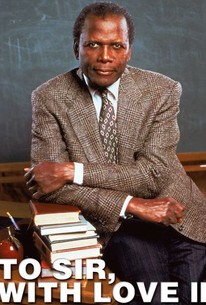 To Sir, With Love II Photos

Peter Bogdanovich directed this made-for-TV sequel to the well-remembered 1967 drama To Sir With Love. After 30 years as a teacher in a rough-and-tumble London school, Mark Thackeray (Sidney Poitier) finally retires and returns to America, settling into what he imagines will be a quiet life in Chicago. But Thackeray soon discovers that the nearby high school is not unlike the school he left behind in London -- run down, lacking discipline, and in dire need of teachers who genuinely care about their students. Thackeray decides to volunteer his services to the school, and soon finds himself teaching a history class to the toughest students he's ever had to face. Lulu and Judy Geeson, who starred as Poitier's students in the first film, make cameo appearances in To Sir With Love II, with Daniel J. Travanti and Jeff Sill highlighting the supporting cast of the sequel.

Critic Reviews for To Sir, With Love II

There are no critic reviews yet for To Sir, With Love II. Keep checking Rotten Tomatoes for updates!

Audience Reviews for To Sir, With Love II

There are no featured audience reviews yet. Click the link below to see what others say about To Sir, With Love II!

To Sir, With Love II Quotes