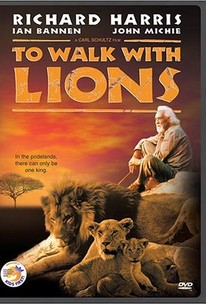 The story of George Adamson, whose work helped inspire the book and subsequent film Born Free, is continued in the fact-based drama To Walk With Lions. In Kenya in the late 1980's, Tony Fitzjohn (John Michie) is a young man from London who has a job as a driver with a safari guide company. However, Tony's commitment is less to exploring the wilds than in picking up women (especially wealthy tourists), so when he's fired, Tony just wants to get another job fast to get airfare home. The first position he finds is assisting George Adamson (Richard Harris), who with his bother Terence (Ian Bannen) helps "rehabilitate" lions from zoos and returns them to the wild. George is more devoted to his animals than to most people, but a bond of respect and understanding develops between George and Tony, and Tony develops a similar rapport with the lions. Tony also develops a different sort of attachment to Lucy (Kerry Fox), a British anthropologist studying indigenous tribes in Kenya. However, the tone shifts when George's ex-wife, Joy (Honor Blackman) arrives for a visit. George and Joy did not separate on cordial terms, and their meeting is brief and contentious (while Joy made a tidy sum from the book Born Free, George never received any of the money for his continuing work with the lions). Shortly after her departure, Joy is killed by one of her servants. While To Walk With Lions is in several respects critical of the wildlife policies of the Kenyan government, the film was financed in part by Kenyans and was filmed in Kenya with the support and cooperation of state authorities. ~ Mark Deming, Rovi

Critic Reviews for To Walk With Lions

There are no critic reviews yet for To Walk With Lions. Keep checking Rotten Tomatoes for updates!

Audience Reviews for To Walk With Lions

There are no featured audience reviews yet. Click the link below to see what others say about To Walk With Lions!

To Walk With Lions Quotes