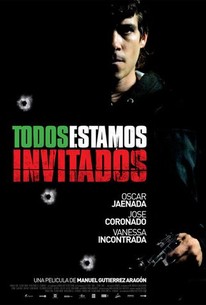 The realities of terrorism in Spain provide the backdrop for this political thriller from writer and director Manuel Gutierrez Aragon. Xabier (Jose Coronado) is a well-respected university professor who is a member of an exclusive Basque dining club. The club is home to a number of Basque nationalists who believe the use of terror against the Spanish government is appropriate and justified; Xabier does not share these views, and speaking out against terrorist violence at their gatherings has earned him several enemies. While Xabier believes the members of his club defend terrorism as theory rather than practice, he discovers that's not the case when one of the loyalists threatens his life and unknown invaders ransack his apartment. Meanwhile, Xabier's girlfriend is Francesca (Vanessa Incontrada), who works as a clinical psychologist in a Spanish prison hospital. One of Francesca's newest patients is Josu Jon (Oscar Jaenada), a Basque terrorist who suffered a head injury when he wrecked his car while being chased by police. Josu Jon has lost much of his memory, and as Francesca helps him piece his life back together, he finds he can no longer support the cause for which he was once willing to die. But Olatz (Leire Ucha), leader of the terrorist cell Josu Jon worked with, is not about to let one of his soldiers walk away without a fight. ~ Mark Deming, Rovi

Its existence is a triumph. [Full review in Spanish]

There are no featured reviews for Todos estamos invitados at this time.