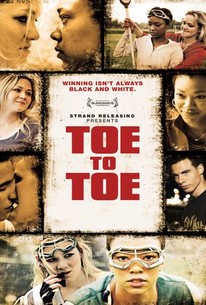 Two seniors at an elite Washington, D.C. prep school forge a close relationship on the lacrosse field, only to find their growing bond tested in this drama inspired by a study that indicates interracial friendships end at age 14 for approximately 87 percent of American teenagers. Fiercely determined to succeed and build a brighter future outside of Anacostia, Tosha (Sonequa Martin) is an African-American scholarship student from one of Washington's poorest neighborhoods. Perhaps Tosha's polar opposite, Jessie (Louisa Krause) is a privileged white girl from Bethesda whose promiscuous tendencies threaten to become her undoing. Though the relationship shared between the two girls is most certainly of the love/hate variety, they both strive to gain a better understanding of one another's plight as society threatens to drive them ever farther apart.

Anwan Glover
as Himself

Erica Chamblee
as Kendra
View All

Critic Reviews for Toe to Toe

It is a well-intended, complicated film we should be debating and encouraging similar projects in production. Welcome to the canon.

Toe to Toe deserves credit for delving into the rich dynamics of interracial friendship and teenaged social tectonics. And it features some terrific acting.

For good stretches, Toe to Toe has an engaging frankness about youthful liberty as both a weighty armor and a dangerously alluring escape hatch.

What happens when a movie's lead actors are better than their material? You get something like Toe to Toe.

An unusually honest, compassionate and challenging view of contemporary youth, neither sugarcoated nor prurient.

Krause and Martin consistently rise above the material; we'll hopefully see more of them under better, less Larry Clark-like circumstances.

A demented, amateurish after school special, Toe to Toe is only useful as a means to observe a first-rate actress in the making. The rest is pure rubbish, delivered with all the subtlety of an air horn.

Toe to Toe features two exceptionally layered performances at its center, as well as ideas that don't sort themselves out in neat and easily summarized fashion.

Hell hath no fury like a sister scorned, especially for a wigger!

Spreading social awareness is a valuable pursuit, naturally, but when filmmakers take it upon themselves to don the cape of an activist hero while constantly reminding audiences of their nobility, the message feels cheap.

Winds up biting off more urban high school malaise than we can swallow without gagging.

Audience Reviews for Toe to Toe

Well-acted drama centered on interracial relationships and economic statuses between two vastly different worlds that connect demonstrating how small it is after all. A great film from the Sundance Film Festival.