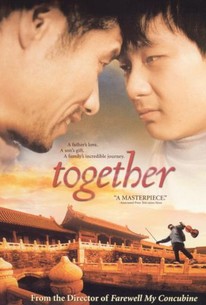 Critics Consensus: Though melodramatic at times, Together is heartwarming and well-acted.

Critics Consensus: Though melodramatic at times, Together is heartwarming and well-acted.

Critic Consensus: Though melodramatic at times, Together is heartwarming and well-acted.

Chen Kaige's first Chinese film since the poorly received, Hollywood-produced Killing Me Softly is based on a true story of an adolescent violin prodigy coming of age in Beijing. Raised in a small town, Xiao Chun (Tang Yun) is brought to Beijng by his devoted single father, Lui Cheng (Liu Peiqi), who recognizes his talent and is determined to make him a success. After losing a rigged competition for admission into a prestigious music school, Xaio Chun is taken as a student by a brilliant but distracted teacher, Jiang (Wang Zhiwen), and begins to become distracted himself by his twenty-something party-girl neighbor Lili (Chen Hong). He eventually leaves Jiang for more rigorous study under a more famous teacher, Professor Yu (played by director Chen himself), which leaves him torn between his burgeoning career and the loving father who has sacrificed so much for his benefit. Woven throughout the narrative are trenchant comments about the changing face of modern Beijing.

Bing Liu
as Debao
View All

Critic Reviews for Together (He ni zai yi qi)

It is best read as a paean to the power of music -- while it is playing, the film is at its most persuasive.

Never wavers from its serviceably warm and fuzzy path.

The performances are all terrific, but Together never jells as a compelling narrative.

It's a touching film in which the actors, including director Chen Kaige in the role of Prof. Yu, deliver heart-touching performances.

If you're in the mood for tears and triumph, with a dash of exoticism, Together may well be the film for you.

[T]here's really everything to recommend in here; beautifully directed, wonderfully acted and it's just a great looking film.

...a small-scale movie set in modern Beijing that comes right up to the brink of mawkishness and is saved only by some residual inscrutability in the narrative.

This film has wonderful music in it, and a pretty good story. The acting is solid and the cinematography is excellent.

Reeks of sentimentality and mawkish characterizations.

A powerful film that should have been much better.

Together is a drama of exceptional, elegant beauty... it's the kind of movie that makes you smile, that breaks your heart, that keeps you watching for more.

a story of old China versus new, of the transforming power of music, and of the love between a father and his son

Audience Reviews for Together (He ni zai yi qi)

Another masterpiece from one of Asian cinema's best filmmakers. Beautiful, touching, and boasting memorable and real characters.

I have to admit: I didn't see the first 20 minutes, but it grabbed me immediately. It's about the love between a father and a son. The father wants to give his boy the chance to become a famous violinist, even if this means they can't be together (there's a beautiful story behind it all). The boy feels responsible for the people around him and will do just about anything to please them. What can I say more.. Great characters, great movie, see it!

Outstanding Film, All Subtitles, But this didn't take away from the movie, Very Intense, A Must See.