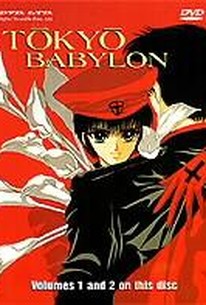 This special program contains both volumes of the supernatural thriller TOKYO BABYLON. In the first, a businessman named Shinji Nagumo is living well and prospering while others have suffered deadly consequences during the construction of a new skyscraper. But his good fortune is about to end. Subaru Sumeragi, Japan's most prominent psychic, is trying to figure out what's at the root of these fatalities.The second finds the police turning to a psychic when they have trouble tracking down a demented murderer who's been targeting women in the subways. Mirei Hidaka has incredible "post cognitive" powers that give her the ability to see visions from the past merely by touching a body. However, once she's put on the case her own life falls in peril as well. Now it's up to Subaru Sumeragi, Japan's most famous medium, to put an end to the fiendish murderer's spree of terror before Mirei becomes the next victim.

the narrative is competent, with some decent fantasy-action near the end, but on the whole the program didn't seem as creative or intriguing as many of the others

There are no featured audience reviews yet. Click the link below to see what others say about Tokyo Babylon!