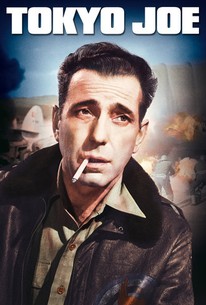 In this drama a heroic WW II Air Corpsman returns to his Tokyo home where he owned a nightclub. He left years ago after thinking that his wife had died. Upon his return, he discovers that his wife and daughter are very much alive. Unfortunately, she is now married to a lawyer. This doesn't stop the veteran from trying to win her back. While there the head of the Japanese secret service, blackmails the ex-flyer into flying smuggled war criminals into other countries with the information that the veteran's wife worked as a "Tokyo Rose" type of radio broadcaster. Later the pilot confronts her with this damning information and she explains that she was forced into it. Now the pilot must do all he can to get them all safely out of their difficult predicament.

James B. Cardwell
as MP Captain

In an era when Hollywood loved cut-and-dry endings, Tokyo Joe is notable for the way Humphrey Bogart's character never steps fully into the light, or out of it.

Not much to take away from this world-weary melodrama except for a lot of gloom.

There are no featured audience reviews yet. Click the link below to see what others say about Tokyo Joe!