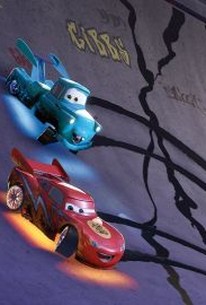 Inspired by the hit 2006 film Cars, the Disney Digital 3-D short film Tokyo Mater follows Lightning McQueen's rusted yet trusted pal Mater the tow truck (voice of Larry the Cable Guy) as he enters the high-stakes world of Japanese drift racing. A routine tow job has landed Mater in Tokyo, and now in order to prove his worth, the ramshackle truck will go wheel-to-wheel against a malevolent gang leader and his powerful band of ninjas. Now, in order to master the art of the drift and defeat his intimidating opponent, Mater must seek a little advice from his good friend "Dragon" Lightning McQueen while receiving a few much-needed modifications under the hood. Originally seen in theaters before Walt Disney Pictures' Bolt, Tokyo Mater was the fourth installment in Disney/Pixar's ongoing "Cars Toons" series.

There are no critic reviews yet for Tokyo Mater. Keep checking Rotten Tomatoes for updates!

im lumping all of the cars shorts in to this review, although of all of them the 3 stars is more for the quality of tokyo mater than the others. the noir episode is also solid, but tokyo mater is an excellent little short that could have held my attention 3 times as long. some of the mater shorts arent great, but as a collection they were a great buy for my kids and watching all of them is a quick 40 minute family viewing.