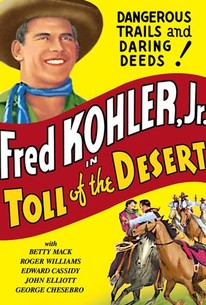 Toll of the Desert transcends its "B"-picture origins with a plotline that would have done Zane Grey proud. In one of his few starring roles, Fred Kohler Jr. plays hero Bill Carson. Apparently orphaned at the age of 4, Bill grows up to become a scrupulous honest, upright sheriff. In this capacity, he brings notorious outlaw Tom Collins (Roger Williams) to justice, never dreaming that the villain is his own father. Rather than compromise his son's integrity, Collins never reveals his true identity -- not even as he's being led to the gallows. Heroine Betty Mack, late of the Hal Roach Charlie Chase comedies, gets to sing a song or two.

Billy Steuer
as Bill as a Boy

Ace Cain
as The Lookout
View All

Critic Reviews for Toll of the Desert

An unpretentious western, this production offers little to intrigue patrons.

There are no featured reviews for Toll of the Desert at this time.

Toll of the Desert Quotes